"I came not to make money as many people do, but... I was coming to America to acquire a lot of knowledge." 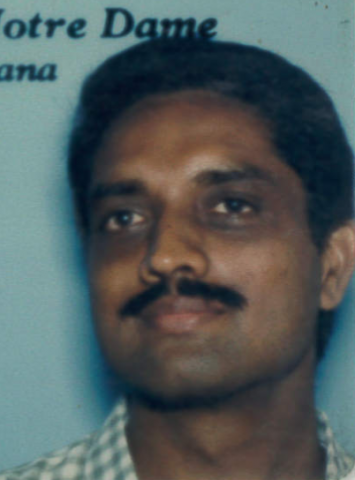 
It was August 1992 and I left from the city called Baroda in the state of Gujarat in India. I was teaching at university there and I came to do my PhD in English, that’s been my discipline. I came to O’Hare in Chicago and took the limousine (which is a bus) to South Bend, Indiana, all the way to the Notre Dame campus.

One of things that I remember is...so there’s these kinds of communications gaps that occurred despite the fact that you’re really quite at home in the language that is English. Which gives you the false impression that because it’s English you would understand everything in America. And, on the other hand, because you look different--you’re brown---you know they expect you not be fluent in English and you expect that they will recognize immediately that you are different because you are fluent in English. (laughs) In fact, there is a kind of miscommunication.

But, back to the first day. The one other impression is a very positive one of the drive to South Bend. I was not jet-lagged at all, the bus was very comfortable, and as soon as we left the city, I just loved the greenery. It had just rained and it was all lush and green. And we were--I just loved the rainwashed greenery.

And then of course, I got to the university. There was a fellow graduate student who had been there for three years. He happened to be from India, from Mumbai and he was there to take me to this other graduate student, a white American nun at the time. She was going to be my mentor. So that was nice. Angela was my mentor, Angela Schwer.

He took me to Angela’s student apartment on campus and we had a meal and a very long, interesting conversation about mostly academic things. I came, I should say, hungry for knowledge. I came not to make money as many people do, but as somebody...I was coming to America to acquire a lot of knowledge.