"So, this is the land of opportunity and I’m pretty much red, blue, white right now." 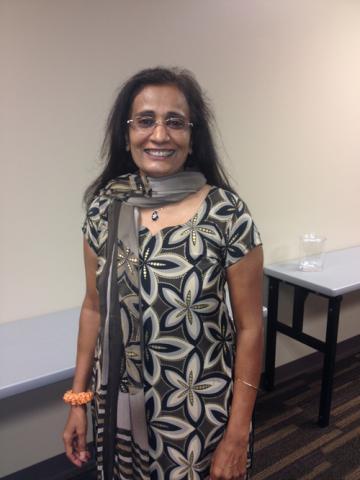 
I came to the US on June 15th, 1981, through marriage, and it was a big culture shock. I arrived at the California airport and when I got out of the airport all I saw was cars. I thought that road was the car factory. Then I came to Portland airport, and Beaverton, Oregon, and then my husband picked me up and said, “Now we’re going to go to my apartment.” I thought, wow, he has such a big apartment! It was humongous apartment complex. I did not know he only owned a one-bedroom apartment, and thought he owned the whole thing. The next day he went to work, and I opened the refrigerator, and I saw only lettuce. I had never seen lettuce in India, so I thought it was cabbage and began to make a sabji. I looked around for oil and did not find it but saw some peanut butter, and thought I could use it. So I put the peanut butter in a pan and it started smelling, of course. And then I just put the lettuce in there, and realized it was not cabbage. His two roommates came in and asked what the smell was, and I said, I just burned the peanut oil. And they explained that it was peanut butter, and this is how you eat it. That was a drama. A couple of days later we went out and I saw a sign that said “body paint”. And I said, “boy, in America they do body paint?” so I went to the store and I asked what that was. They explained that it was car body paint. Then it did not take me long to figure out that this was the land of opportunity. I went to school, I did my B.S, my computer science, I worked with a big firm, and I have two sons. My older son is in medical school, and my younger son graduated with a fine arts degree, and is working for a big firm in Houston. So, this is the land of opportunity and I’m pretty much red, blue, white right now.