"You know, it was just magic. I was transported to a completely unreal place." 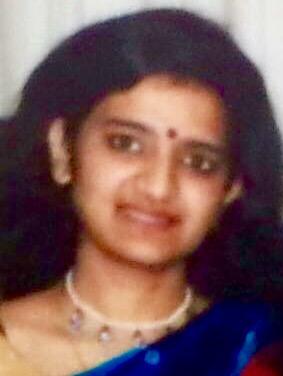 
So my name is Preeti Shridhar and I left Chennai in India and I came to study in Saint Paul, Minnesota. I had done a few years of my bachelor degree in India and was coming here to get my degree. I came in winter. It was actually the dead of winter. It was February and with the wind chill, in Minneapolis it was 32 below. So there was itself the extreme contrast in terms of the temperature. But I did have a flight via Los Angeles, so my first port of entry was LAX and in a sense that was almost the beginning of my story of my first day.

So when I landed in LAX it was very early in the morning and my connecting flight to Saint Paul, Minneapolis was much later in the afternoon. It was like a 3pm flight. But I didn’t think of going to the airline counter and seeing if I could get an earlier flight.

So I come into LAX. My eyes were like wide open. Some amazement, you know, a sense of thrill that I’ve come to the United States, but also fear. You know, when I say I was eighteen, it’s not like the eighteen-year-olds that I since then encountered here today or even my child. There was a lot more innocence in some ways and we were a lot more protected in a sense. And of course, just the immense journey of having come from India to here a young girl, you know, at that age.

So, anyway, I’m here in LAX and I got this long time so I said, “Okay, I’m gonna find a rest area.” I saw signs and it said, “Restroom.” So I followed those signs and I found that there was no rest area. It was the women’s bathroom. So I said, “Maybe, you know, I have this terrible sense of direction so I maybe I took a wrong turn. “ And I found another sign and I’m not joking, I circled around, round and round, every corner of LAX. I explored every inch of the airport and all I was finding was the bathroom * laughs *. Where’s the restroom? Exactly! I mean, I really did not know that public bathrooms were called restrooms because that was not the terminology that was used in India or anywhere else. And then finally I gave up and I said, “I’m just gonna sit at the gate and wait for my flight.”

Then, anyway, I came into Saint Paul, Minneapolis and it was evening and it was dark and I was fortunate I had family coming and picking me up. When I came, I saw what looked to me…it was just unreal. It was these unending fields of white. Of snow. You know, you had the kind of streetlights setting up this almost luminescent, warm glow on the snow. And this was really like…I remember we used to get Christmas cards which would have this white snow and these houses with slanted roofs with snow and some glitter. You know, it was just magic. I was transported to a completely unreal place. I was just in awe and I said, “It’s beautiful.” And I was speechless. And my cousin was in the car and he just looked at me and he’s like, “What is she saying? It’s cold!”

As I mentioned, I came to complete my undergraduate studies and I was in a private college. It was called The College of Saint Catherine. It was an all women’s college, which was also interesting. And I used to get all kinds of strange questions. You know, people would ask me whether we had cars in India, how come I was a woman who was able to be educated, was that allowed. I actually found myself often being called to talk to groups within the college, like women’s groups or clubs or whatever. And a lot of the time, I used to talk about the dichotomy of the state of women in India. So there has always been even in my growing years that dual role of women and being that this was a women’s college, it gave me that platform to both explore it for myself as well as to talk about it. So I did enjoy that.

And then the one thing I remember which I kind of take pride in was…So I was graduating from the college and we had, you know, graduation ceremony. They had some rules and one of the rules they had was that below your ground there was so much space so that legs could show. So they basically wanted you to wear a dress and then you wear your cape and gown outside that. And I wanted to wear a sari and there was another girl who was from Japan, from Tokyo, and she was the first in her family who getting a degree. And they had actually sent this traditional kimono that she wanted to wear that was embroidered and that was like a family heirloom. And they told us, you couldn’t because you had to wear a dress so that your legs could be seen and everyone was uniform.

The reality is that it was not such a big deal for me. I would have easily worn a dress, but since this other girl was so upset, I took it upon me to make a big deal out of it and I went through all the different channels, all the way to the principal’s office and I said, “You know, this is our tradition. You say you’re welcoming students from all over the world, and yet, you’re not allowing us to celebrate our most important traditions.” And they changed the rules for the first time in the history of the college. I wore a sari and the other girl wore a kimono and I think when that door was open there was a bunch of others who wore, you know, different traditional outfits. We still wore the capes, but we did start a new tradition for the school.

I came with a certain mindset and I would give this advice to myself and to anybody, saying, “Don’t come with a mindset. Come with an open mind.” For whatever the reason, whether it’s a reason of what your future’s going to be or what you’re going to accomplish or who you’re going to be with. I think keeping that open mind…it’s like being a sponge. You can really take in a lot more and as you take it in, you can also give. Come with an open mind and be prepared to work really hard because there is no shortcut. There is no easy way out. And every challenge is harder initially when you’re an immigrant.