First Days Project
My name is Ulrika Haglund.
"They played 'Empire State of Mind' by Alicia Keys and Jay-Z on the radio. It felt surreal in a way, but in another way it made me more confident in my choice." 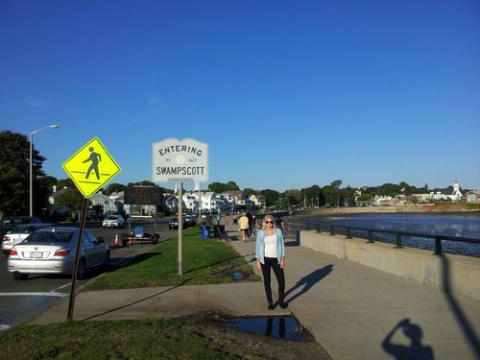 I landed at the JFK airport in New York late in the evening 22nd September 2014. I knew we would have to go through the immigration control and that it could take a while. We stood there for a long time. After 1.5 hours in line I started to feel a like when children have “ants in their pants”, very impatient. The longer I stood there the more nervous I got, that one or more of my papers would be missing or that something else would go wrong. Luckily everything went well. I got through immigrations and I got my suitcases. I walked out of the airport and found the bus that was going to take me and the other au pairs to the au pair training school.

Right as we jumped on the bus a magical moment appeared. They played “Empire State of Mind” by Alicia Keys and Jay-Z on the radio. It felt surreal in a way, but in another way it made me more confident in my choice, as if taking this big step in my life was meant to be. We waited for a pretty long time before we left, but as I was so caught up by the moment my sense of time wasn’t there. When the bus was full, full of au pairs from various countries, it took off to the au pair training school in Long Island, NY.

We arrived around 12.00 am, got our room numbers and settled in to sleep. The beds were so hard and noisy. Breathing was enough for my bed to make a squeaking sound, and the bed sheets felt like paper. However, I managed to fall asleep after a while but it didn’t last for long. An hour later or so someone came in the room and started to set up one of the other beds. I didn’t realize at first, that it was another au pair coming. When I figured it out I just thought to myself “poor girl, if I think I won’t have enough sleep, she will sleep even less!!”. We had to be up at 7.00 am the next morning to have breakfast and start our au pair training classes. Getting up early wasn’t a problem for me, because of my jet lag. My eyes were wide open 5.30 am.

I got myself ready and headed to the breakfast room. I was already aware that the U.S. wasn’t famous for their healthy life style, especially in terms of food, but this was even worse than I thought it would be. All I could find was food made of mainly sugar or food dripping with fat. If they tried to serve some specialties to impress I must say, in my opinion, they failed. I couldn’t wait to go to my host family, in hope that their nutrition would be of a healthier choice.

The training school was far from glamorous, but the days still passed quickly. I met many new friends and had a lot of fun, some of them I hope to see again one day. However, I felt more than ready to meet my host family. I couldn’t wait to get settled in my new room, and have some proper food to eat. I also hoped to not feel like I was rolled up in paper towels while sleeping.

Friday finally came. It was time for all au pairs to go to their final destinations, their host families. I mostly felt excited but also a little nervous. I was trying to figure out what outfit to wear. I know I wasn’t hired in the fashion field but I also didn’t want to make the impression of being a slob.

Well on the bus we got some snack bags handed out to us. I looked it through, and wasn’t surprised when I found a bunch of sugary snacks in there. Although, I found this mozzarella cheese, shaped as a stick. I thought that it could do for a snack. But, later on when I took a bite of it I felt disgusted by the taste. It wasn’t at all like the fresh mozzarella I used to eat at home.

After almost 5 hours on the bus we reached our destination, Newton, Massachusetts. That was where all the au pairs who were going to live in the Boston/MA area got picked up by one or more members of their host families. I was picked up by my host mom alone. She greeted me with a hug, and I noticed how beautiful she was. We started our drive to their house. It took about an hour, but it felt longer, because of that awkward silence that often appears the first time you meet someone.

She had earlier told me how pretty the area they lived in was. Once we reached the sign saying “Entering Swampscott” she stopped the car and said “Go stand by the sign, I’m gonna take a picture you can put on your blog.” As I did, I looked out over the beach, it was big and beautiful with a pier. It was an amazing view. I also remember how it reminded me of the intro to the TV show “Sunset Beach”. I used to watch with my sisters when I was younger. She was right, my host mom, it was so so pretty! I was hooked from that moment on.

We arrived at the house and the first thing I saw was a big sign saying “Welcome Ulrika”. My host kids had made it for me. It was so cute. Later that afternoon I met my host kids for the first time. They were so cute and funny all from the beginning, even though it took a while before they respected me as an adult in charges of them.

When I left Sweden 2 years ago I lived a life that I think many would refer to as ideal. I had my long-term relationship with my boyfriend, my cat, a nice rental apartment and an average income for someone uneducated in my age group. I also had family and friends nearby. Despite all this, I still couldn’t find myself happy. My work was draining me, both mentally and physically, and I couldn’t find inner peace and satisfaction. I felt as if my mind was searching for something I couldn’t understand. I was heading straight towards a depression.

I realized I had to change my situation, so I decided to follow the desire I had during my early teenage years, to move abroad. My first thought was to move to the UK, since two of my sisters already lived there. But, on the other hand I had been curious about the U.S. for a long time. That became my destination.

It’s amazing how life changes sometimes. What I thought was going to be a 1-year adventure turned into 2 years (due to my extension year as an au pair) and now I’m attending my freshman year at a college in the United States. Me and my boyfriend broke up 5 months after my move, and along the way a few of my relatives passed away. It was a though period of time, especially since I was far away from my loved ones. Although I was lucky, because my host family really supported me through everything.

Despite the hard moments I had to go through, I don’t regret a thing. My decision to move is the best thing I’ve done in my life. I have changed from the stereotypical good-girl to being more spontaneous and daring to take risks, but I have also found the inner peace and satisfaction that I was searching for. Lastly I want to say, don’t be afraid of what’s to come, do what your heart desires and life will take you on an amazing journey. There are no wrong reasons for a change.