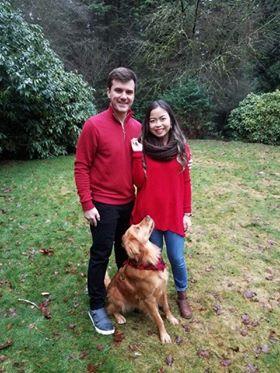 
Lien Pham first moved to United States from Vietnam in 2014 with her husband, Kevin. She met her husband for the first time in Vietnam after talking online for a few months. Together, they moved to South Korea for a short time, before moving back to Lien’s home country, and eventually deciding to make the move stateside. While in Vietnam, Lien spent a year going through the Visa application process before being able to move to the US with Kevin, who is originally from Burlingame, California.

Lien’s first day was spent primarily in the San Francisco Airport, where she was thoroughly questioned by immigration officers, and in Burlingame, California, where Kevin was from. She spent about a month in California before moving Woodinville, Washington with Kevin and his father. After about a year, she moved to Seattle where she currently lives with Kevin and their dog. Pictured to the right is Lien and her husband Kevin.


My name is Lien. I'm a senior at UW studying Communication and Global Health. I came to the US in 2014, so about four and a half years ago. I met my husband in Vietnam, and we moved to South Korea together. And then after that we moved back to Vietnam, we opened an English school and then there's a time that we feel that we could not live apart from each other. So we decided to get married and then we talked and we think that the US will have more opportunity for both of us. So we got a Visa approved in Vietnam, but going through the US, I still carry about probably two packs of folder of documents like our relationship time, kind like my birth certificate, his birth certificate, all the document that you can you could think about. So Kevin got out of the airport an hour and half before me. So he was just waiting on the other side. But the way the San Francisco Airport layout is that I could see him while I'm waiting and talking to the immigration officer. So he asked me a bunch of question like why am I here, how did I meet my husband, what am I planning to do, for my address that I'm going to stay in California. So it was about two hours. I was, I was totally shocked and I thought that because when we got the Visa in Vietnam, we waited for about nearly a year, and we got everything approved. So I thought that going to the US will be much easier, but when I got there, it was completely different. So I was a little bit shocked and then getting off the airport and going home. So Kevin’s dad picked both of us up and it was late at night. And my first meal in America was In-N-Out Burger and a fry and a soda.