First Days Project
My name is Nalini Juthani.
"I was confused and conflicted that I was entering a country where my identity was an Other." 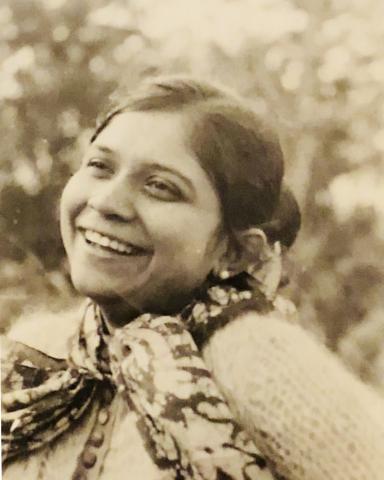 What led you to immigrate to America?
I had graduated from Medical School. My goal was to specialize in America and travel. I met my husband in March, 1970. He had similar goals and he had secured a training position in a hospital in Highland Park, Michigan. We got married on May 31, 1970 and departed for the US within a month, together.

What is your recollection of your first day after reaching America? Was America how you pictured it?
My mind was preoccupied with the disembarkation form that I needed to fill out prior to landing in New York. There was a question on the form about the ethnicity of the immigrant. I had to check whether I was 1. White, 2. Black, 3. Hispanic, or 4. Other. I was confused and conflicted that I was entering a country where my identity was an Other. This was disturbing!

My husband, Viren’s friends met us at JFK airport in New York. We stayed with them for one night and on the next day left for Highland Park, Michigan which was our final destination in the US. Viren’s friend, Shanti knew the difficulty he had without money in the first few days. We had reach La Guardia airport. Shanti called a taxi for us and prepaid $5 to the driver. We were grateful to have a friend who took care of us. I already had a mixed picture of America in my mind.

What was the hardest thing about being a new immigrant?
We did not have money. Viren’s training site, Highland Park General Hospital had given us an apartment with bare minimum furniture. We were not rich in India but we were not this poor either. The hospital paid the first pay check to the doctors 15 days after they started work. Those 15 days were most difficult. I asked my husband to request his director to loan him $200 and in return he could leave his passport with the director as a security. The director, Dr. Shapiro was shocked that we had no money to live for two weeks until the first pay check arrived. He wrote his personal check and refused to take any security. I bought just the basics to survive. I walked to the super market every day. Viren worked long hours and ate free food in the cafeteria. Sometimes he brought home some food for me. Being a doctor with a smile, although poor, got us some empathy and support.

Where did you first live after you reached America?
After the first night in New York, we lived for one year in Highland Park, Michigan.

Tell me a little bit about the early days here. Did you work or go to school? How did you spend your time? Who were your first friends or others who offered you support?
Survival was my first goal. I walked to the supermarket. We did not have a car and public transportation was scarce. Cars would usually stop when I crossed the street which surprised me. I raised my hand and bowed my head to express my gratitude. I brought dinner for my husband in the hospital when he was on overnight call. Other doctors giggled when they saw that both of us ate dinner together in the hospital. Viren had enough of cafeteria food! After the initial three months, we had enough money to pay the installment for a brand new car. I spent almost half the day in the hospital library to prepare for my exams. The librarian became my friend. One day she asked me if I would work in the library for a month while she would take vacation in her home country, the Philippines. She told me that I would need to go to the City Hall and take a simple exam to get the license required to be a librarian. Driving to the town was a brand new experience for me but I ventured out. Having reached the town hall I did not know that I had to park the car and feed the meter. I saw a man put some coins in the meter. I quickly jumped out of the car and asked him about feeding the meter. He was in a hurry but very kindly he put some coins in my meter and said “your car is safe for four hours” and he left. I did not have time to pay him or thank him for this very kind gesture. I took the exam using common sense but without any preparation. Sure enough, by end of that week I had the license. I could work as a librarian; my first paid job for a month! I was thrilled!

How frequently did you communicate with your family back home? How did you stay in touch?
Those days the only means of communication with my family was by writing letters. Telephone calls were very expensive and connection was usually not clear. I wrote to my family every month. The letters took two weeks to reach India and two weeks to return back. Once a year on Indian New Year’s I called home just to hear their voice although there was hardly any meaningful communication. I usually gave them all the good news. I never told them about the difficulties we were going through during the initial month.

What was the hardest thing about coming to this country?
I wanted to work as a physician but I had to wait until I get all my credentials to get a license to practice medicine. This waiting period turned out to be a blessing in disguise. After the first job as a librarian, I worked as an operating room technician. These para medical jobs helped me see medical practice from a different perspective. It taught me to be humble!

What was the best thing about coming here?
We had freedom to explore, learn new things and take every opportunity to travel. My first American friend was a Black woman, Cora, who taught me a lot about what it meant to be a White, Black or Hispanic person in America. She tried to empathize with my ethnicity as “Other”.

Did you think you were coming to America permanently or for a short time? If initially you thought it was for a short-time, how did you feel when you realized America would be your permanent home?
When we arrived in America, our J1 visa status would allow us to stay for five years.

Dr. Shapiro, Viren’s Program Director told all the immigrant trainees that everyone who immigrated to the US expressed 100 percent desire to return back to their home country, during the first year. This desire would begin to tumble down as they stayed longer in the US. By the end of five years no one returns back to their country of origin.

After five years, we had enough money to visit India. Although we were delighted, I felt like India was not the same country I left. I was a foreigner in the US and I felt I was an outsider in India as well. My thoughts to adopt America as my permanent home produced anxiety and guilt. It was time to return back to America after two weeks. I had mixed feelings. I missed my family and friends; I missed the familiarity! But then again, this was an illusion. I was struggling to call America my permanent home.

What advice would you give someone arriving in the United States today as a new immigrant?
America is a diverse and culturally rich country. Those immigrants who feel entitled to remain the same and not adapt to the new land usually suffer. I expected to “Give” to this country and its people rather than find ways to “Take” whatever I could. I would advise them to stay away from judging people. There are good people in every kind and difficult ones in every kind as well. My kind of people, South Asians, is no exception!

Do you have any other reflections to share?
I have lived in this country for almost five decades and raised our three children. We have traveled extensively within the US and set foot in every continent of the world. In my experience there is no land like America.

I am fortunate to be an American citizen!