First Days Project
My name is Manu Patel.
"The cream was free but I have to pay for a whole glass of milk. It felt like a bullet hit me because each penny was like gold to me." 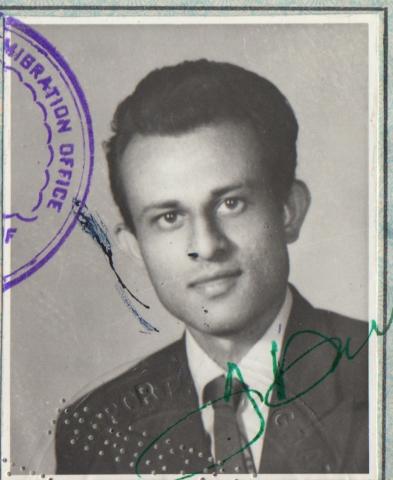 I provided my Indian collage transcripts and Rs200 to an agent who was securing admissions to American universities. He first secured me an admission from Indiana Institute of Technology but it was not recognized by the reserve bank of India for foreign exchange. He then rushed and quickly obtained an admission from Mississippi State University. I had to quickly send them my photo because the university was not admitting any African origin students and time was limited to enroll for the fall semester. The reserve bank approved the dollar exchange and the American embassy issued an F-1 student visa on September 3, 1963.

I boarded an Air India plane around 1 am on September 4, 1963. I arrived in London on the same day and stayed with my sisters & brother-in-laws for four days. While in London they asked a tailor to make a wool suit for me in one day and they give me their own suitcase because my suitcase was slightly broken which was my uncle’s used suitcase. They also bought me a heavy wool sweater and provided me with about $25 in cash. The reserve bank advised me to exchange only $9 cash and $200 in traveler’s checks in Bombay.

During those four days in London, I also changed my airline ticket from Air France to Air India. The ticket agent in Bombay insisted I use Air France so he could receive a larger commission. At least he agreed that I could use Air India from Bombay to London and then Air France from London to New York. I saw a few tourist sites in the city of London before I boarded the Air India plane on September 8, 1963 bound for the U.S.A.

I landed in New York around midnight on September 8, 1963. The plane was eight hours late, I was to arrive during the day. I passed customs around 2:30 am with two shirts, two trousers, a pair of pajamas, and a sweater in a borrowed suitcase. I also had a tooth brush, a plastic tongue cleaner (which broke in one month), three rotis and dry potato veggie in a small carryon bag and I was wearing my wool suit with a tie and shoes.

At the airport I was impressed with the automatic door opening and closing, the running escalators, lots of bright lights and clean wide open spaces. I proceeded with my luggage to the break area for tea. I first went to the rest room and noticed the toilet door did not open. It was written on the handle slot: 10 cents. I went to coffee shop to get change. They gave me coins and showed me which one was the dime. I dropped the dime and opened the door. I then went to have tea. I ordered tea with milk and sugar. The tea bag and hot water was served in a kettle along with a glass of milk. The sugar was on the counter. I did not know that Americans used the word cream instead of milk. The cream was free but I have to pay for a whole glass of milk. IT FELT LIKE A BULLET HIT ME because each penny was like gold to me. I needed money ($341) to enroll in the fall semester and to buy books. I had to partially pay fees to enroll and had to request additional dollars from the reserve bank.

I now had to find my way to Mississippi State University in Starkville. I called the information desk for guidance using the wall phones in the airport but I could not understand them. So I continued to repeat my questions but I could only hear the girl on the other end laughing at me. Somehow I found out that the airfare to Starkville was $62 and the bus fare was $31. I selected to go via bus to conserve my money. The Greyhound bus terminal was located in the center of New York City which is about 30 miles away from the airport. I put my bags on my shoulder because the ground was muddy but it was hard to lift and walk since there were no wheels on the suitcase. I walked about one block outside the airport to catch the connecting bus to the city. It was still dark and a tall husky bus driver asked me to leave my bag near the loading area and asked for a tip. I asked him how much as I pulled coins from my pocket and he picked up two quarters from my hand. Once again I FELT THE BULLET. I forgot the exact amount of bus fare I paid from the airport to the city, it might have been about 25 cents. It was cheap back then. I reached the Greyhound terminal at dawn. It was big and I was nervous. I bought a ticket to Columbus, MS but I had to change buses in Birmingham, AL to a Trailway bus. The Greyhound bus route was not available directly to Columbus. I also had to take a local bus from Columbus to the university campus in Starkville which was another 25 miles away.

The Greyhound bus journey from New York started within a few hours. I was on my way to Mississippi State University. But “Hooray” was not on my mind. I sat in the front right row near a window. The driver was across from me so I could communicate with him if needed. I could not understand him when he spoke on the microphone. I also made sure that they put my bag on the same bus. I kept memorizing the bus number. I was tracking my bag at every bus terminal stop. Each stop was anywhere from fifteen minutes to one hour depending on lunch and dinner times and any new bus transfers. During long stops, the driver kept the bus door locked and no one was allowed on the bus. Therefore wherever the bus stopped, I rushed to the restroom and hurried back to stand near the bus, sometimes half an hour, to make sure I was not left behind. The bus transfers occurred at one or two main terminals. I stood watch over my bag and followed it to the correct bus. I kept going back and forth to check bus number, the destination board and the gate to make sure I was on the right bus.

I slept on and off on the bus trip. At one stop, during the afternoon I ate roti and the potato veggie from my bag on an outside bench. Some were curiously looking at me but I kept my eyes down. At another stop it was dinner time and I stayed on the bus, an old Caucasian lady brought me a sandwich with cheese, ham, and tomatoes. This was the first time I ate ham and cheese and I did not like it. I ate half and I threw the rest in garbage when the lady diverted her attention.

At another stop a Caucasian girl boarded the bus and sat next to me. It was night but I could not sleep. She requested my hand to hold and we held hands until her stop. She kissed me on my cheek when she got off at her stop.

The Greyhound bus reached Birmingham in the afternoon and now I had to find the Trailway bus terminal. I asked the ticket agent and he tried it explain it to me but I could not understand him. I saw a well-dressed gentleman reading a newspaper. I explained my problem to him and he stood up and rebuked the agent for not properly guiding me. Actually, I was to be blamed for not understanding agent. The gentleman then took me in his convertible car to the Trailway terminal which was a mile or two away. He was the president of a paper product company per his business card.

The Trailway bus reached Columbus in the evening around 8 pm. Once there, the ticket agent informed me that the commuter bus to the university had already left and that the next bus will be running in the morning. He pointed me to a hotel across the street but I did not want to spend a single penny. I asked him to let me sit in a chair all night inside the terminal and he agreed since the ticket counter stayed open throughout the night. About ten minutes later two students from university came to visit the ticket agent. He asked them to take me back with them. They loaded my bag in their car and drove me to the apartment that was occupied by Indian students. It was a four bed room house. In each room there were two single beds, a common kitchen and a dining room. It was filling up as the new Indian students arrived. I was the sixth student there and we were eight students in all, two in each room.

The next day I went to eat in college cafeteria but I did not like the taste of the food. It was boiled spinach, mashed potatoes, beans, and bread and butter. I did not buy any meat items. After few days the other Indian students and I bought two to three vessels and started cooking Indian style spicy food. This consisted mostly of grilled cheese sandwiches, rice pilaf, toasted bread and vegetables.