First Days Project
My name is Cheng Imm Tan.
"I speak English. Why should I be scared?" 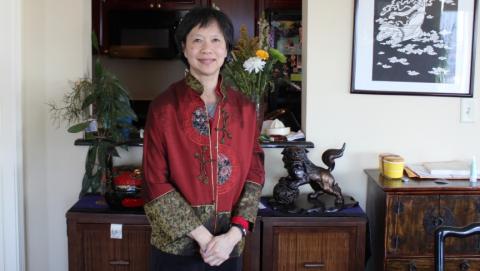 
Cheng Imm Tan came to the US from Malaysia as a student in 1978. The way she tells it, her parents were against the idea, but she was determined.

She researched American colleges that had accepted Malaysian students before, and randomly sent out applications. Soon enough, she'd landed herself a scholarship from Wilson College in Chambersburg — a small town in southern Pennslyvania.

On the plane ride over, she remembers sitting next to a businessman.

"Aren't you scared?" he asked her.

"I speak English," she replied. "Why should I be scared?"

She touched down in Philadelphia and remembers an interminable three-hour drive to Chambersburg.

"I lived on an island that takes an hour and a half to go around slowly," she says. "I couldn't believe how far we had to go to get to the college."

She was dropped off with a host family near campus. They showed her her room and let her settle in. A few minutes later, the woman of the household came upstairs to ask Tan if she wanted some supper. "Oh, no thank you," Tan told her. "I'm not hungry."

"Are you sure you're not hungry?" the woman asked.

"Yes, I'm really sure. I'm not hungry. Thank you so much." And then, to Tan's astonishment, the woman said, "Okay. We'll see you tomorrow then," and she went back downstairs.

"I was like, 'What?' I was starving! In my culture you never let anyone go to bed hungry! You never let anyone come into your house without eating anything. You always feed them, and they always protest, and you always insist they eat, and this is a ritual. Eventually, everybody eats. I went to bed that night hungry!" Tan recalls.

Tan was in for another bit of culture shock when she got to campus.

Once she moved into her dorm, she wanted to take a shower. She was shown a bathroom with a tub, but no shower. "I'll take a bath then," she thought to herself.

"It must be American higher technology," she thought. "There must be some way the water drains out that I don't know about."

There was no pail either. So she went to her room, retrieved a coffee mug, filled the bathtub and started washing herself the way she used to back home. Soon, she heard a knock on the door.

A fellow student called out to her, "Why is there water flowing out of the bathroom?"

She realized, with horror, there really was no drain.

"When I reflect on it, you know, it makes me laugh," she says. "But it also makes me think, 'Wow, wouldn't it be nice if somebody knew enough to orient us a little bit more?'"

Tan says these were minor incidents compared to the larger challenge of understanding how people related to one another, and the pain of isolation she felt in her early years here.

She went on to study at Harvard Divinity School. A professor there helped her realize that some of what she was experiencing, especially her sense of being invisible, was actually the result of racism. She remembers thinking it couldn't be racism because she was Chinese.

"What I didn't know is there are many faces of racism," Tan says. "I didn't know about the history of Asians in this country. I didn't think racism existed against Asians ,and particularly against Chinese people." Tan says the experience politicized her. "When you begin to understand the different ways in which people are marginalized, and you have a structure and a framework to understand it, you want to change it."

Tan ended up settling in Boston. She became an ordained minister in the Unitarian Universalist Church. She made a career as an advocate for women and immigrants, most notably as founding director of the Mayor's Office of New Bostonians, helping immigrant communities "move from the margins to the center." She also founded the Asian Task Force Against Domestic Violence, started a food pantry for the Asian community called Ricesticks and Tea, and leads the much-loved Gund Kwok, an Asian Women's Lion and Dragon Dance Troupe.

It seems fitting, after the ordeals she weathered during her first days in the US, that Cheng Imm Tan has now launched a private coaching practice to help foreigners integrate into American life.

"Immigrant communities are the core communities of the American psyche," she says. "Every generation of immigrants has come because they have a dream and a vision. Without that dream and that vision we wouldn't be the country we are today."