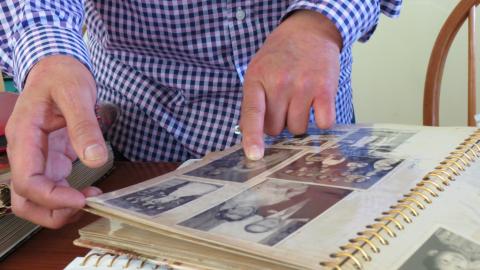 
Philip Lam recalls the rationing of water in China when he was younger under the Communist regime. He explained you were given two gallons of water to use to bathe each day. The decision of what part of your body to wash first was a careful calculation. First your hair, last your feet, as they would be soiled first.

Lam doesn’t care to dwell on the past because in America he has freedoms he could never have if he remained in China. Still a teenager when he came to Seattle in 1969, Lam found Seattle to be too dreary and after a few months he made his way up to Saskatchewan, Canada. Lam didn’t last long there after discovering just how cold it got up north and figuring out ice hockey was not for him. He returned to Seattle where his sister and other family members were living so he could be closer to them.

It wasn’t long after returning to Seattle that he began his career at Ivar’s Salmon House, where his sister was working. 46 years later, Lam is still working for the company. He started in the kitchen at Ivar’s, and explained he had learned some things from his father, who loved to cook. For Lam, coming to America meant having a life where he could have choices. There was no homesickness, no regret. Just delight and gratefulness for the freedoms America has given him.


My name is Philip Lam. I was born in 1950 and I am still working in the Ivar’s commissary in charge of making the soup. I was born in Canton, China. Canton is very close to Hong Kong.

My first day in Seattle, I said, “Wow — no wonder they were talking about how grey it was.”

All my relatives are over here. My uncle, my aunts — you know, they all were in the northwest.

The first thing I looked at is my sister introduced me to the Salmon House where she worked and where she goes to school. She was going to SPU then. It was very close by. So I was working there for a little while. And then I went to … I said “no — that’s not my cup of tea,” so I went to Canada instead. Maybe six months at most. It was in August and it started snowing. That’s my excuse actually: it’s too cold! And I don’t want to be left alone, you know, because everybody is gone. So I went and stayed with my relatives, at least my sister.

I didn’t know Beijing was so big. I brought my wife and my daughter eight years ago. Just to show them. This was an eye-opener for me too.

Yeah, I was really lucky to be over here, and I was lucky … and when I talked to my granddaughter she asked me the same question: “Why did you come to the United States?”

And then I thought about it — it’s so free. Freedom of speech, freedom of doing anything. Everything is free.