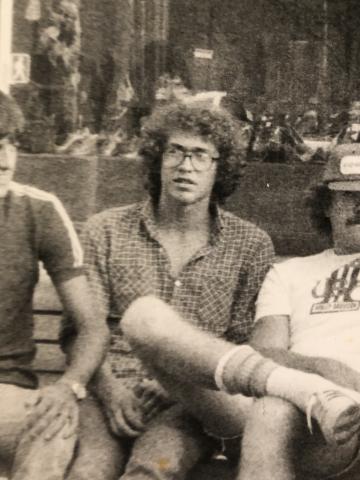 
This is the story, or stories rather, of my father coming to the United States from Italy. My dad was born and raised in Crema, a small town about an hour-drive east of Milan. He went to elementary, middle, and high school there, before studying physics at the Universitá degli Studi de Milan, the main "state" university there. In the summer of 1977, two years after he graduated high school, he went on a transcontinental-road-trip of the United States with a group of 6 friends. They rented a motor-home in New York and drove west. Some of his fondest memories of the trip include Yellowstone National Park and the Grand Canyon. And of course, McDonalds.

After that trip he finished his collegiate studies, and it wasn't until 1989 that he was given the opportunity to come back to the U.S. for work. His company — something based in computer software/engineering — was a sponsor with UC Berkeley, so he volunteered to come to California for a few months to take classes and participate in research. He ended up staying for over two years. During that time he met his wife and my mother, in Berkeley. They began dating, and were married in July of '93. They spent a few years living in Italy before eventually settling down in the Bay Area. Now they live in Piedmont, California, where me and my two brothers were born and raised.


So my name is Massimiliano Chiodo, although everybody calls me Max. I was born in 1957 in Crema which is a small town in northern Italy. I was born and raised in that little town until, you know, through my early 20s and beyond. Yea so I graduated from high school in ’75, and then, when, after a couple of years from since we graduated, with a group of friends, that was 1977, we took our first trip to the U.S. We decided to go on this adventure, so we end up spending, I don’t know, maybe 7 weeks in the U.S. We landed in New York, we flew in to New York City. So I remember we got there that night, the first thing we did was that, “let’s go have dinner let’s go find a McDonalds” because we had heard about the McDonalds, they did not exist in Italy so we definitely had to go to McDonalds, that was the first thing we do, and we did A LOT of McDonalds on that trip. A lot. It was something different for us. Yea so I think that there’s a big thing about coming here was there were all these expectations based on all these cultural references that we were expecting to find and didn't necessarily match the reality, you know, because what you see in Hollywood movies doesn’t necessarily reflect what America really is. So definitely that was my, there was a little bit of a clash there. Anyway, so it was a little disappointing and so I went back home thinking that I didn't really need to go back to America anytime soon. And then of course things change, I graduate from university, I start working, and a lot of the interesting things that happen, especially in my profession, I’m doing computer software so, a lot of the interesting stuff that happens in my profession came from America so that made me curious to come back. So, in 1989 I end up being sent to the U.S., you know, Silicon Valley and San Jose, Berkeley and so on. What happened at the end is that there was this program that my company was participating in and one of the benefits was that they could send, they called it a visiting industrial fellow. I lived in Berkeley, completely paid by the company, I could take classes, participate in research programs, and it was pretty much a dream come true. I was really lucky.