"There is no way I’m gonna die in this country. I want to see the world before I will die." 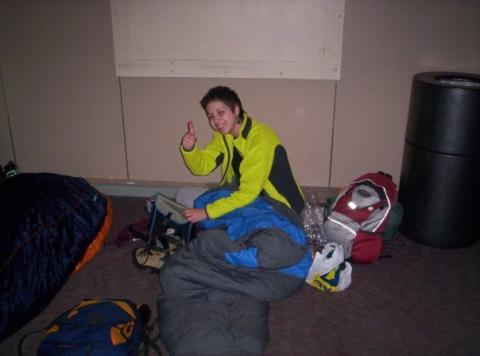 
Vladimira Behrova emigrated to the US from Považská Bystrica, a town in northwestern Slovakia. In her hometown, Vladka was diagnosed with cervical cancer. Her doctor told her she had five years to live and would only be able to find a specialist in the US or Germany.

One year later, when she was 19, she left Slovakia for the US, where she worked in fish processing plants in Alaska and taught herself English. Five years later, she came to Seattle in search of a doctor. Vladka has outlived her sentence and currently works full-time while attending North Seattle Community College.


If I’m gonna die, I said I’m not gonna die in Slovakia. There is no way I’m gonna die in this country. I want to see the world before I will die. I got on the main strip from the airport and I hitchhiked from airport to downtown Anchorage. And I think I got this like, really big car and I’m thinking this car is huge, this is crazy these cars are huge. So I started taking pictures of me right next to the wheels of the cars, because they were like, they were like half of my body, they were like huge wheels, I said this is crazy country. I thought I’m going to like country where there’s everything out of the snow, I’m gonna see polar bears walking around. I was looking for penguins. I totally thought I’m on the moon. I was like, woah, this is crazy. I was really excited to be in America but I didn’t know anything about, about it. I didn’t know you’re not supposed to hitchhike, or I didn’t know you’re not supposed to like sit into like strangers cars right, or um, I was always smiling and I was like going around and being super friendly and I think that’s a kind of sign of weirdness in America. I called my father form Bristol Bay and he says, did you see bear, did you see bear yet? I said well dad, he said, did you see polar bear? I said dad, this is not Antarctica. There’s actually ocean, and maybe whales. Yeah. You would be so shocked that almost my family disowned me just because I came over. The first year they did not even want to talk to me because of that. It was really bad. And friend of mine said oh you’re turning into American, you’re becoming American. It was good decision. It gave me a new life for sure. I got a opportunity to maybe live longer, you know.