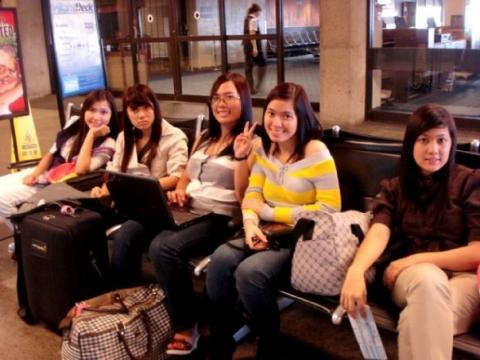 
Paula Pabustan and her family intended to go to Seattle, Washington when they left the Philippines in, but ended up stuck in an airport in Hawaii with people telling them to relax for a while.

After her family negotiated with the airline for a different flight that day, Paula found herself seated in first class next to a stranger and bound for Seattle. The trip across the Pacific Ocean was the first time she had ever been airplane and she shares what her experience was like in the audio clip.

Paula is the youngest of five sisters and was 13 years old when she came to the United States in 2009. In the picture, Paula (left) sits next to sisters (from left to right) Yvette, Hazel, Nikki, and Yvonne. Once she finally reached Seattle, her family joined extended family members who had arrived a few months before.


My very first day we had a layover in Hawaii with my family but what ended up happening is our plane from Hawaii to Seattle already flew.

So we got stuck in Hawaii. And people were like, ‘You guys could stay in Hawaii for a day and just enjoy it…’ but as a new immigrant, we didn’t know what to do and we like told them, ‘We need a flight as soon as possible and we’re not staying in Hawaii because our family’s waiting for us in Seattle.’

So they offered us first class plane ride to - from Hawaii to Seattle and I got sat next to a random stranger, not next to my family.

And as a kid they offered me a lot of chocolates but I said not because I was embarrassed and also I don’t know what to do. Like I was in my mindset I need to pay for this.

But when as soon as we arrive in sea my sisters were like bragging about how many chocolates they got and I was like ‘Oh…I didn’t know it free...’

Yeah that was my very first day in United States.