First Days Project
My name is Thu-Thuy Truong.
"At the time, I didn’t see any value, being a child, of holding onto this culture of ours that I saw as the past…" 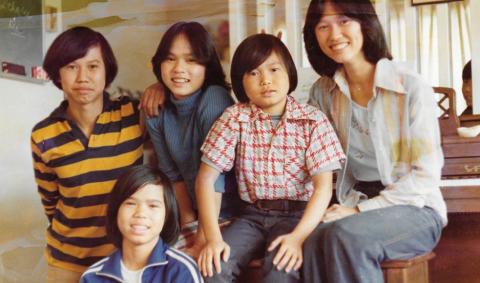 
Red apples floating in barrels of cold water. That’s what Thu-Thuy Truong remembers after she arrived at a refugee camp in Fort Chaffee, Arkansas, not long after fleeing Vietnam with her family in April 1975.

Along with those the barrels of apples, Thu-Thuy, who was 13 at the time, remembers the family's first home in the US. It was a small apartment in Berkeley, California. "Even though life wasn’t that luxurious ... it was our little home,” she says.

The Truongs were among thousands of Vietnamese families who fled the capital of South Vietnam, Saigon, as the North Vietnamese army approached. Many made new lives in the United States. Forty years later, Thu-Thuy and her brother, Sy, collaborated with StoryCorps to talk about their memories of settling in the US.

It was a time of constant firsts. Sy Truong, who was 8, remembers his first ride on Bay Area Rapid Transit, which goes underwater and connects San Francisco with Berkeley and Oakland. The young boy expected to see water and fish through the subway’s windows as it went underwater.

Even though he only saw a dark tunnel, Sy says “every little thing for me was a new experience of something radically different than what we had growing up in Vietnam."

The siblings also wrestled with culture, how or whether to retain their Vietnamese roots. “At the time, I didn’t see any value, being a child, of holding onto this culture of ours that I saw as the past,” Sy says. “The only way to move forward and progress in this new world was to fully immerse and fully become an American. I almost wanted to erase that part for some reason.”

But for Thu-Thuy, music from back home was vital. Her mom loved listening to Vietnamese ballads, and "that’s something that kind of brings us back to the good part of Vietnam,” she says. “So when we were in Fort Chaffee, we don’t have that much money, but we did pay money to just buy some cassettes from other people who re-record and re-record some of our famous singers. Besides us, you know, that’s the only connection to the homeland."

School also meant quick immersion into American life. “One of the major differences I felt was school has people from all different skin colors," Thu-Thuy says. "We have white kids and Asian kids and we have black kids, and feeling, 'Wow, what a totally different life we had back in Vietnam.'”

Her brother remembers being dropped off at the elementary school this way: “I looked at the other kids and they looked very different, both their size and the clothes they wear and everything. And I felt that how am I ever going to fit in? But what I found was I did find a lot of friends. And it was actually a cool thing to be different.”