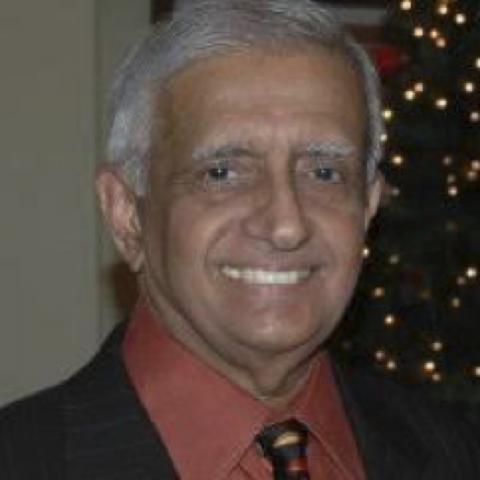 
Dr. Venugopal Menon is a successful allergist-immunologist and author. His autobiography, My Mother Called Me Unni, was a bestseller. Born in Kerala, India, he moved at the age of 30 to Scotland and then came to the US in pursuit of post-grad education and a better career. He lives in Pearland, Texas in a Kerala-style house with his wife Sreedevi.


Where (city and country) were you living before you came to the U.S.?
I was born and raised in Kerala, India, and I spent about the first 30 years of my life there.

What caused you to migrate from your home country to the US?
It's a long story, and all the details are in my autobiography, My Mother Called Me Unni. And what prompted me to write that book, apart from encouragement or persistence for my children was that I felt, as every immigrant should do, that I should leave a note. An account of what I left behind; who and what raised you and gave you support and values. Especially for immigrants, accepting the role of being raised in a country and coming to another country is a key time in one's life. What does it take? What's your role as an immigrant? I was trained as a doctor, and I went to the only medical school in India and Kerala. After independence, India needed more doctors. And Kerala had its first med school in Trivandrum and I was a student there. When I graduated, I, being the eldest in the family, had ambitions of doing postgraduate studies. But at the same time, I had six siblings and my parents to take care of. So, financially, I couldn't handle both supporting a family of 7-8 members and pursuing major studies. By that time, I was married, and had a child. So, the only way to explore our opportunities was to leave India. I ventured out of the country. Before we came to United States I, my wife, and my daughter, went to Scotland where I was offered a job in a hospital. And landing there, I realized it probably is not the best place to explore my opportunities and postgraduate studies. So, after a year of staying there, we came over to the United States. The reason for leaving is obligations and ambition, obligations of a large family and ambition for doing higher studies in medicine.

How old were you when you came to the US?
When I left India, I was just past 30 years old. I spent a year in Scotland and was about 31 when I landed in the US.

What year and where (city and state) did you arrive in the United States?
I landed in the US on the last day of 1969. So, we woke up on New Year’s Day of 1970 in the United States. We flew from Scotland to New York. And then we took another flight to Washington DC. That's where I started my residency in DC General Hospital.

What are your memories of your first day?
Very chaotic and very scary. Because, landing fresh, I had to be on call and take on my duties the very next day. Coming to a hospital, like DC General Hospital where there are hundreds of patients who are waiting and 3-4 for each of us. And talking to patients, I couldn't understand their accent. More than that, they couldn't understand a word of what I said. And in India, patients had a lot of respect for the doctors and they were more polite and all that. On the contrary, here it was a totally, totally different kind of experience. It took many months of getting used to. There was a language problem, the food, a good place to stay. My wife was with me as well as my four-year-old daughter. Also, the weather! Another thing, the month was December or January, but I had spent a year in Scotland. I was familiar with cold. So that was not a major problem.

What was the best thing about being an immigrant to the US?
The best thing is, unlike the country I left behind, there was a system. There was a pride of doing whatever job you choose to do, and a new discipline, the better infrastructure, the comforts.

What was the hardest thing about being an immigrant to the US?
The hardest thing is truly that I was alone. You are in a new country. People don't understand you, people look at you like you are from an alien planet. So, for the first few days and months, and sporadically, you wonder why you put up with all that happens to you. Your mind tells you to just get out of here and go back. But then your responsibility sinks in. You begin to accommodate all the hardships, because, on the other hand there were many comforts like the central air conditioning, the big malls where you can buy anything, transportation and many other things. Back to the positives, the work ethics, the culture of doing any job with pride and passion.