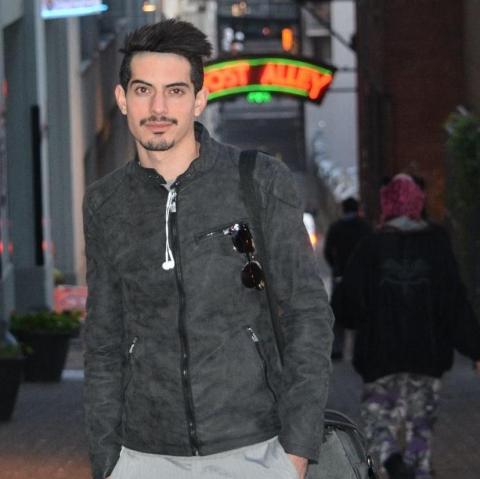 Salamati was originally from Iran. He fled his country five years ago and found refuge in Turkey for three years before coming to the United States. Due to political issues with his government, Salamati felt the need to leave because he could not obey to his government’s way of living because it didn’t comply with his personal ideologies.

“The worst part of a religious government is being forced to live a certain way,” Salamati said. “In my belief, as long as you don’t hurt anyone financially or emotionally, you’re good to live the way you want, you know? It’s your choice to choose your religion; your choice to choose the way you want to live. It’s your life – you’re born once and deserve to live it.”

When Salamati first arrived in the United States, he said the hardest part was leaving his friends and memories behind and having to start over, both in Iran and in Turkey. He was in a huge cultural shock and was stressed because he had no idea what he was going to do here. All he wanted from America was the chance to survive and live because back in Iran, he didn’t feel like he could do that.

Despite the first day's stress, he said that ultimately coming to the United States gave him opportunities beyond what he could have imagined and he genuinely believes that the United States saved his life. He came with no money and not ever having spoken English, and he now attends Bellevue College and works as a data administrator for Therapeutic Health Services.

Salamati thought he wasn’t going to be able to catch up with the American culture, but he has. However, despite having been adapted to the culture here, he still thinks about his home sometimes because there is still an attachment to the land he lived in for 20 years.


“So…uh…my name is Pedram and I came to the United States two years ago. I come from Iran. So I flea my country…uh… five years ago. I had some political issue with my government so I needed to leave. I went to Turkey; I went to United Nations and through United Nation you go through a process that whatever country accepts you as a refugee you can just…uh… have the chance to go to that country so my chance was the United States so I decided to you know… go with the flow and see what’s gonna happen. The whole process for me took two years and uh… when I came to the United States, the first day… I think the really important that I really remember is you know when you left your country, you left all of your friends, your memories, everything behind. And, I spent two years in Turkey and I make friendship again and everything and again I just left everything behind and came to the United States so that was the part I was thinking at that moment like when I… I really remember when I landed in the airport, I was like thinking like it’s gonna be really hard for me to catch up again. And, I didn’t know English at all so it was…really like stressed that I had that time. That was mostly my feeling on the first day of United States. And, you know I was really lucky because there was a refugee agency who took care of us, where they find us a place to live for three months or like after that they help you to find a job so the first day was really like I was like really in a huge shock. Like I was thinking about my past, what I lost, what I’m going to do here you know because it’s really hard to make a plan like in one day you know just need to figure what is the difference in culture you know, that’s pretty much it...”