"The first time I made some homemade food it was very simple and plain food, but both of us gorged up on it like anything." 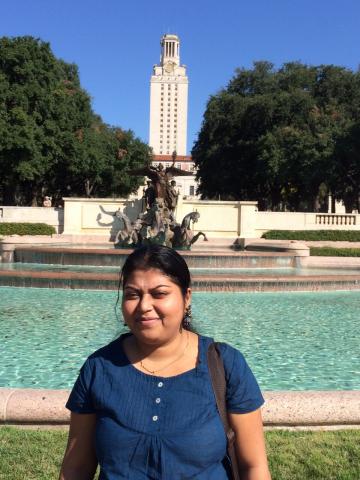 
Hi, I'm Poulami Das. I moved to Austin in September 2013. It was the first time when I visited U.S. I had many thoughts about how the country would be, how the people would be. But, when I stepped in the soil of the U.S., I was very nervous. It was my first time I was leaving my home, so I was a bit sad. I was accompanying my husband. And here I found the city was so fast and everything was moving at a high speed. Cars all around. So, we were put in a hotel and it was a very lonely place, kind of. I couldn't see any faces, and in India we were so accustomed in seeing so many people all around, but here I could hardly see anyone. My husband used to leave for his lab early in the morning. We stayed in the hotel for a week and initially I felt very bad, very lonely, and there was hardly anything to eat. We had all those packaged food and all that with us. We used to warm it up and eat it. There was an Ethiopian restaurant nearby, I remember. And, we went there, but somehow I didn't like the food much [laughs]. But then slowly we started looking for an apartment and I shifted to this far west area. Then it was initially a flat to me and I had to arrange everything. Luckily we were helped by one Indian family who helped us a lot. And then slowly slowly we got into place everything. We got our first utensils. The first time I made some homemade food it was very simple and plain food, but both of us gorged up on it like anything. It was a good experience then. Then I interacted with some of our neighbors who were American, some were Chinese people, and they were quite helpful. They talked to us, they helped us in one or the other way. Then, gradually, I started liking the place. Now I feel much, much better because I have so many friends here. Some awesome friends, like Basudhara is one of them. So now I'm enjoying.