"I remember because Halloween. When I came, everyone was wearing costume. I never knew of this before because in India we never celebrated. So, when I came, I was confused. I thought all Americans were like this. ‘Weird’, I was thinking (laughter)." 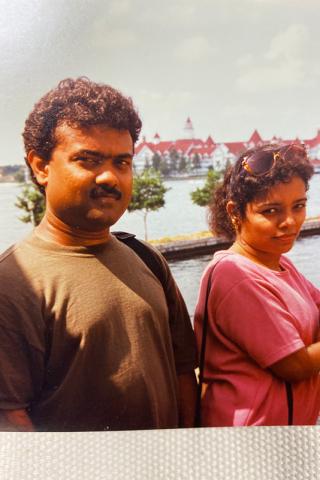 Hmm…I came in flight and landed late at night. I think I came on October 31st. Ahh yes, October 31st. I remember because Halloween. When I came, everyone was wearing costume. I never knew of this before because in India we never celebrated. So, when I came, I was confused. I thought all Americans were like this. ‘Weird’, I was thinking (laughter). Anyway, I came late at night because I first landed in Pittsburg and took a small plane to Detroit. The plane was so small that if I leaned left, the whole plane would follow (laughter). Umm…after landing, a man from the company I was going to work at had come to pick me and two other guys up. He seemed in a rush, when I came out of the plane, he was already waiting with all our luggage. He took me to the hotel, Red Roof. I stayed there that night, before next day work. I went to work, and it was so different. In India, we would all sit in a small room like a classroom next to each other working, but here everyone has a cubicle and so much space. The building and parking lot were huge, so unnecessary. I thought it was weird that there were so many people who lived in the same area and were going to the same place, yet all of them drove separately. And now I’m like that (laughter) ‘don’t come in my car’ (laughter).

For breakfast I had eaten plain bread since I didn’t have anything and for lunch, the office had a huge canteen. Those are like the one’s in your dorms. I remember the boss warned us saying, ‘don’t touch those, they are for the employees.’ Then after work, I went to sign for an apartment with one other man from work. At that time, you could get a discount for bringing someone in to sign, so he took me everywhere (laughter), same day as apartment, he took me to buy a used car, Honda. He even took me to buy a ‘buy one get one’ pizza (laughter). I wanted to get everything done fast, well I didn’t have a choice. But also, my wife was coming in 2 months, I wanted to settle everything very early. It’s funny, I came on Halloween and she came on New Years eve. And she saw all the Christmas lights and thought that’s how America is while I saw all the Halloween stuff and thought that’s how Americans are. So yeah, (laughter), that’s how my first day was.