"What will my wife and two kids think about this move? And how will they adjust whilst I'm going to be busy at work?" 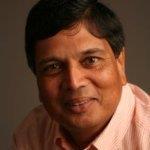 
Arriving at Washington, D.C. from London part of a very large company called British Telecom was a rather interesting experience looking back now. Here I am as one of just three senior people that were going to be part of an already established company that was acquired. So there were two or three aspects that caused a little anxiety. One is, clearly, arriving into a country which I had no experience in terms of living or in terms of family. Two, being part of a company where 99.9% of the folks were totally new to the head office that I worked for. And three, socially and culturally being moved away from what I considered to be family back in England... having lived in England for 25 years and having been responsible for most of my family out of Africa to live in England I was moving over to the U.S. somewhat reluctantly, because England was still home, family was there. It was meant to be for just one year, so at least I said, "Okay, we'll see how that year goes." But the first day sitting on the long flight to Washington D.C. these thoughts were going on in my mind. What will my wife and two kids think about this move? And how will they adjust whilst I'm going to be busy at work? Two, how will people at work with over a thousand people accept me as somebody coming from England as part of the management team? So being brought in by my company, British Telecom, that was the acquirer. So there's some, not necessarily resentment, but some suspicion that... here is an individual, what does he know about our business? And what is he going to report on to the head office? And three, socially, culturally, not knowing anybody in Washington D.C., where are we going to live? How far is it going to be from the office? How am I going to drive on the wrong side of the road coming from England? And, how are we going to cope with the winter? Fortunately I was arriving in summer, in April, and that wasn't an immediate concern. But still, knowing that Washington, D.C. gets a lot of snow... how are we going to cope with that? London doesn't get much of snow, but also has its winters. Anyhow, there I land.

And you know, Dulles airport is quite overwhelming even though Heathrow airport is quite big too. But, straight away from seeing... I still remember vividly this individual who directs the taxis. How quick he was in calling out the taxis and 'Yes sir, where are you going?' and I just stood there totally in some shock that an individual whose job it is just to get people into cabs was doing that continuously with a loud voice and I didn't know how to respond. I didn't even know that I was supposed to tip him! But there I got into a cab, and no concern, he was very polite and shut the door behind me and called out the next cab for the next person. So that kind of said, wow, you know, here is an individual, totally unsupervised and providing a service to people arriving at the airport. He didn't know where I was coming from. He didn't know who I worked for. But all he was doing was just focused on the job at hand. And that kind of impressed me about my first day in the U.S.