"I think the one that really sustained me and enriched my life was the library." 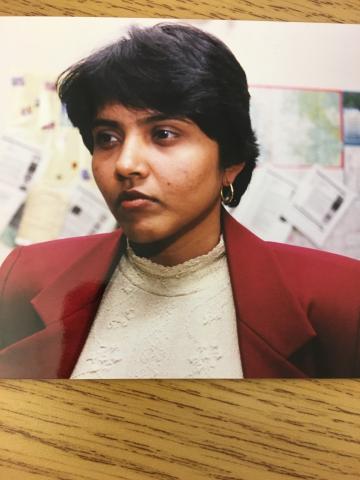 
I had gotten married on December 3rd and my husband was already here in the United States, so I was joining him. He had come already earlier to Seattle so I wasn’t travelling with him, I was travelling alone and my departure was for 24th December. So I arrived in Mumbai along with my family. My parents were there, my grandmother came…it was a big huge send off. And as we were going in a taxi to the airport, we go through this particular area called Bandra, which has some old churches and it was really a festive mood there. There were lights all over. People were kind of going towards the midnight mass and there were lots of celebrations all around. And then when I came to the airport, I think it was a very…I was very excited, but at the same time I was very sad because I was leaving my parents behind. And this wasn’t my first time I had ever stepped out of the country, but this was the first time after marriage, so I think it was emotionally kind of very stressful for all of us.

But I got on the plane and somehow because it was Christmas Eve or Christmas, I was expecting something spectacular or at least something different on the airplane. And it didn’t happen, so I was very disappointed. Then when I landed in Seattle, first of all I think, it was December. It was not very crowded there, so it was pretty light as far as passengers were concerned. But I did not see any festivities at all. So that was kind of interesting for me. Now it seems interesting that at the time I was like, “What? You don’t have any Christmas decorations all around?” *laughs* It was a little disappointing.

And my husband and his friend were there to receive me. What I remember other things about the first day that I came in was that he had his own car, which was, you know, very nice because I didn’t have my own car when I was growing up in India. And as we go from the airport to where we live, you can actually see on the I-405 you can see the Boeing factory where they assembled the 737 airplanes. And, you know, he pointed it out to me and it’s a tradition now whenever we have any visitors that’s the first thing we point out to them. So that road and the highway, I think that kind of, you know, is very much imprinted in my memory as coming to see him. So even when I come home from, you know, travelling abroad or anywhere else as you’re coming back from the airport that has become almost like a talisman. You know, I always look at that. The Boeing huge factory that’s there. But yeah, that is, you know, a glimpse of my memory and my very first day in the United States. But it was overall a very pleasant experience and I was very excited to start my new chapter in life.

And ours was an arranged marriage. So we knew each other for a year because we were engaged for a year, but I was in India and he was here and I would write to him a lot. So we had kept in touch that way, but in 1997, you know, the telephone was very expensive so we hadn’t talked to each other a lot. So the first year was really rediscovering each other and enjoying, you know, being in each other’s company.

I started looking for work because that was very important to me. I was practicing as a lawyer when in India and I really wanted to start practicing and looking at opportunities. And unfortunately, you know, they weren’t very forthcoming. I didn’t have a chance to just take a bar exam and just start practice. I was told that I would have to either, you know, do a Law Clerk program or go back to school, which was not an option for me at that time. I started volunteering at the local library and I also volunteered as a case manager at a municipal court. So those were like some of my highlights that happened in the first year.

And then also I was very focused on starting a family, so I had this whole plan laid out in my brain where I was like going to have two kids before I was thirty. *laughs * Yeah, there was no room for negotiation! So, you know, as soon as the opportunity came, I think I was pregnant by August of that year and my daughter was born on February of 1999. So that was also….a lot of things happened that first year! *laughs*

It didn’t feel overwhelming. I think I was ready for these changes. And, you know, I think India had progressed so much as well so not many things seemed very different to me and I think that was another great thing. I think the one that really sustained me and enriched my life was the library. I loved to read so just going to the local Bellevue library…I used to just take the bus there. It just felt so good because you didn’t have to fight over books. You didn’t have to wait weeks and weeks to get a book. You could just get it for free. That was a huge thing for me when I came. I loved reading.

And if I were younger I would say, “Take chances. Yeah, you don’t have to get married. * laughs * There will be relationships you will have later on.” The first year was just grappling with, “Oh, I’m not going to be able to do that so what does that mean for me and my identity and, you know, for all the hard work I put in.” And that it seemed like a waste of time. And so that was potentially the hardest thing that I faced in my first year. And the other things was just learning how to take care of the home, learning how to do groceries, learning how to not eat a tub of ice cream when I was depressed. * laughs*

Even though I didn’t pursue my law degree, I am involved in social justice and art and, you know, trying to elevate women’s voices found an incredible community here and I’m just very thankful.