"So there is no room to wiggle. If you wiggle that means the future of our family would be in jeopardy. And I cannot in my own conscience do that." 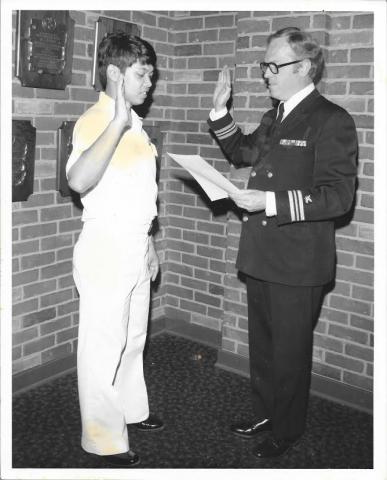 
I was born in Manila, way back in 1949. I joined the Navy- the United States Navy- in Manila. In the Philippines. And then from there, we were based in San Diego, CA for basic school training. And after that we were assigned aboard ship. We flew from the Philippines to San Francisco. It was again from San Francisco to San Diego for training.

Did they give you any time to see San Francisco? Or were you just kept on base?

So what was that experience like? Did it feel any different?

What did you think about basic training in San Diego?

My first ship was the U.S.S. Providence (CLG6). And basically, it’s a flag ship of the First Fleet. But we do… we went to Vietnam. We participated during the Vietnam War and there were close events that could have ended our life.

What year was this then?

1971-1973. That’s when I was aboard the ship. And in 1972, that’s when we were in Northern Vietnam, during one of those. That’s the first time… our ship was the flag ship, but here comes an aircraft carrier. It’s the U.S.S. Coral Sea. And that admiral from that ship is coming aboard our ship, because we are the flag ship. But during the process, the helicopter crashed. Five out of eight passengers died, including the admiral, the chief-of-staff, and his flag secretary. Five out of eight died. Three survived. Two out of those who survived were pilots.

When asked what he thought of the food during his first days in America, Mr. Marucut told the following story.

Growing up, it was this: We only had two choices back in the Philippines. Do you want it or don’t you? Here, soup and dessert. I mean- this is a feast! This is funny. At the mess in boot camp, you know, you go in there and get your food. Rice and bread. I think, “My God, this tastes good!” So I got rice and bread, you know as long as you eat it. I got half a loaf and the Master-at-arms looks at me. When I joined the Navy, I only weighed 120 pounds. Skinny like this. I didn’t weigh much. 120 pounds. The Master-at-arms looked at me and said, “You better eat all of that!” I said, “Yes, sir.” So the next time, I know he’ll be there again. I get the same amount, but I pressed it so it was only this much. So he says, “OK, recruit, now you’re learning.”

When you first arrived, did anything surprise you?

Even in the military, we thought we were insulated. I have to repeat this again. Well, it was a plantation. Meaning you hardly had any rights. Only duties. And you cannot do, or are allowed to do, things that you can do even if you are qualified.

It was not rainbows and popsicles and ice cream. It wasn’t like that. Again, survival of the fittest.

Mr. Marucut relates why he immigrated to the U.S.

Because of me, I was able to come to the United States and serve in the Navy and become an American citizen. Through me, I was able to bring my parents. My father’s wife died and against all odds my mother took him back again. So I bring them. And then my brothers and sisters and their families as well. So at present time, because of me, there are more than 50 of us right now. Starting from me. And they are all in their own ways, successful and a model citizen in this country.

You know deep in your heart that this is a one time opportunity. You cannot screw it up, and it is up to you. And for me, again, my mom, brothers, and sisters are all depending on me. It’s only a straight line. It’s only a straight line. Ok? So there is no room to wiggle. If you wiggle that means the future of our family would be in jeopardy. And I cannot in my own conscience do that.