"The natural beauty surrounding me somehow made this foreign land feel more welcoming." 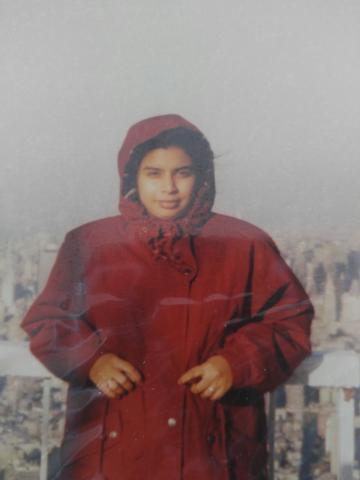 I left India a few weeks after my wedding. My husband was waiting for me in a city I had never heard of prior to meeting him a year ago: Raleigh, North Carolina. I was 22 years old and it was my first time flying alone, let alone leaving the country. My tightknit family was worried about me, which is fair considering they were sending their young daughter to a foreign land they had only seen on TV. Although my family’s apprehension rubbed off on me, I was excited for this new chapter in my life.

I said my goodbyes at the Chennai airport and set off for America in a yellow silk churidar, my two suitcases, and all the courage I had. My first stop over was in Germany. I sat at the gate waiting for ‘B23 Boarding’ to show up on the screen. Next to me was another young Indian lady who I started talking to to pass the time. She lived in America with her husband and had just gone to visit India for a few months.

"That's going to be me in a few years...visiting India instead of living there," I thought.

I was curious about the food in the U.S. so I asked her what she and her husband eat for breakfast and she said “muffins”. I had no idea what a muffin was but I found out shortly after I reached North Carolina.

There was a change in my gate, so I went to the gate receptionist to inquire. When I started speaking, the receptionist was extremely rude to me and he claimed he did not understand my Indian accent. I eventually found the gate, but I was disheartened by his comment and hoped that people in America were not like him.

The last flight went smoothly and before I knew it, I had touched down at Dulles International Airport in DC, the city where my daughter studies now. A nice man at baggage claim was friendly and helped me with my bags; my earlier worries about Americans being rude were alleviated. I immediately called my parents on the nearest payphone to let them know I landed safely. I could hear the relief in my parents’ voices. I stepped outside and was in awe of how tall the trees were and how clean the streets were. I was excited to reunite with my husband and drive to my new home in Raleigh. He was happy to see me as well and introduce me to his way of life.

After leaving the airport, my husband and some of his friends took me to a sandwich shop, which was my first meal in America. In India, we rarely ate out as my mother is an exquisite cook. If we did eat out, it was strictly at an Indian restaurant called ‘Sapphire’ where my father knew the owner. At this point, I had still yet to eat a muffin.

After dinner, we departed to Raleigh, NC. The tall trees were still an amazing sight to me. The natural beauty surrounding me somehow made this foreign land feel more welcoming. Four hours later, we arrived at our 1 bedroom apartment. Then, my husband and I went to a nearby grocery store. It was much different than the markets in india--so many choices and different foods I had never tasted. It is at Harris Teeter I finally learned what the lady in Germany meant by ‘muffin’. We bought a few essentials like curd, which I found out is called “yogurt” in the U.S. and returned home. I made a mental note of all the distinctions and eventually started recording them in a notebook so I would not forget.

That night, as I fell asleep in a new bed, in a new city, in a new country, I felt my first wave of homesickness. It snuck up on me, because the main emotion I felt on my first day was excitement. With time, the homesickness became less intense, but it’s been 25 years and I still feel it at times. My heart resides in two different countries and I love each one for helping me become the woman I am today.