First Days Project
My name is C.M. Naim.
"It was a date in mid-September, 1957, when the Pan Am round-the-world flight I had caught in Calcutta reached San Francisco." 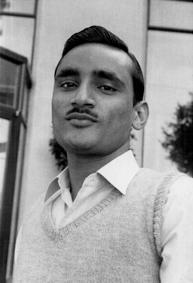 It was a date in mid-September, 1957, when the Pan Am round-the-world flight I had caught in Calcutta reached San Francisco. There was no one to meet me at the airport; the professor who had invited me to work with him was in the hospital. He had however sent me detailed instructions: I was to take a bus into the city, then two other buses to get to Berkeley, and finally a fourth bus to get to the International House. I was bone-tired, not only from the long journey but also from the three months of uncertainty. The perversity of Indian bureaucracy and an appendectomy that had become complicated as I had rushed around from one office to another had left me drained, both physically and in spirit.

I have no memory of how I got through the customs and found the bus to the downtown terminal, which then was just a large hall on a side street where buses gorged and disgorged airline passengers and their baggage. Jostled around by the crowd I somehow managed to find my heavy, unwieldy suitcase, but could not locate the equally stuffed Pan Am airbag. Among other things it contained my degrees and passport, the instructions from my professor, and all my American money, a grand sum of twenty-five dollars. My panic increased as I rushed around, dragging my suitcase with me. If I collided with people, I didn't notice. If they spoke to me, I didn't hear. I didn't know what to do. I had no experience with telephones, nor did I know anyone’s phone number to call. All such information was in that bag. As the hall emptied and it became clear that my bag was nowhere in sight, I sat down on a bench and quietly cried.

Then the elderly black man whom I had seen helping passengers with their bags and taxis came over and spoke to me. At first I didn’t understand him—I had never heard anyone talk that way—but gradually some sense of what he was saying came through to me. He wanted to know why I was crying. He asked me if I needed some help. Somehow I managed to explain my situation—my loss and my not knowing what to do. Neither my accent nor my dilemma seemed to him insurmountable.

According to him, the bus that had brought me had also brought a woman who had a vast assortment of bags and parcels with her. He was sure she had unknowingly gone off with my bag too. He assured me it was not a big problem since he knew the cabs that had come that morning, and that he was going to send out a radio call for a particular cab to come back to the terminal. I heard the words but couldn't make any sense of them. I only stared at him with blank eyes. I think he brought me something to drink, then went away to do the ‘magic’ I had no reason to believe in. When he came back he told me that the cab he believed the woman had taken was a private one, and thus not equipped with a radio. He had, therefore, asked all Yellow Cab drivers to be on the lookout for that cab and send it back to the terminal when located. Needless to say, I had no idea what he was talking about.

I sat there, numb with a fear of the unknown. I had no money, no way to contact my professor or find my way to the International House in Berkeley. What was I going to do? After nearly an hour, the old black gentleman came back with a white man, and explained to me that he was the driver of the taxi that took that woman to her hotel and that he was now going to take me to her. I’m sure I didn’t believe what he said, but I picked up my suitcase, not letting anyone give me a hand with it, and went with the driver. At the hotel, I wanted to drag my suitcase with me but the cabman made me put it in the trunk. Then we marched up to the Reception and from there to an elevator that rose and rose until it opened on to a corridor of thick carpet and muffled lights. The cabman knocked briskly on a door; then explained to the lady who opened it why we had come. But I had already seen my precious bag in the midst of her suitcases and boxes scattered over the floor. I rushed forward and grabbed it, and zipped it open to show them its contents. My eyes glared: ‘Look, this is mine—not yours.’ She was flustered. She apologized. We marched out. I don't think I said a word until the driver and I were back in the cab; I then asked him if he could take me straight to the International House in Berkeley. It was on the other side of the Bay, and there were tolls to pay. I showed him the money I had. ‘Was it enough?’ He nodded, and away we went. Gradually, my senses crept back into me. I began to see the sights, hear the noises, feel the air blowing in. And then suddenly a whole new sense of confidence filled me.

There we were, on that amazing bridge, with vast stretches of sun-lit blue water spread underneath us. A powerful machine was speeding me ever so smoothly to a destination that now seemed so certain. The cab no doubt had a roof, but it felt as if there was no barrier of any kind between this world and me. An openness prevailed. The new world held no terror for me any more. I had witnessed a miracle, wrought by a total stranger who had helped me when I had no one to turn to and lost all hope. I gained that day a kind of confidence and feeling of trust that has come to my rescue many a time since then. Not that I have not despaired since that day. I’ve hit the bottom several times. I have been lonely and angry and terrified, and worse. I have experienced exploitation and racial prejudice. But thanks to that day I have always managed not to blame some anonymous America for my troubles.