"The idea was you come here, you stay here for four years, or five years, whatever, and then go back, you know, to your country, and to live there, serve, whatever." 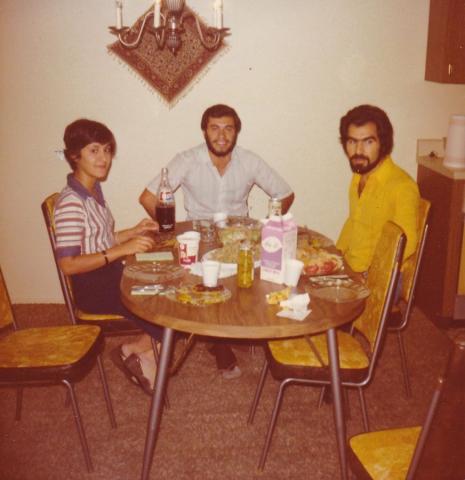 
I don’t like to go back to something, just in general, I have something, and I go on and then I go, I don’t go back. Maybe if I don’t like this thing I move forward somewhere else, but I don’t normally go back. The idea was you come here, you stay here for four years, or five years, whatever, and then go back, you know, to your country, and to live there, serve, whatever. It wasn’t supposed to be a, you know, an immigration forever. U.S. had better education system and people that could afford, they would send their kids for education. September 4, 1976 is when I came here. Iran Air from Tehran to, to London and then London to New York. We literally flew like with $200. Came with one suitcase, a little bit of English, my brother did all the talking for me. I could say things, I could say some words, you know, I could understand, what’s the song? Um, American Pie. So I thought my English was very good. I remember, um, that morning he took me out and he told me what hash brown was, cause I’d never had hash brown, we didn’t have hash brown, and I said, what is that? He’s like, “oh, it’s potatoes,” I said, “why does it look like that?” He’s like, “ya, you know, just just eat it. You’ll like it.” And I liked it. My dad, um, told me, this was back in the 80’s, he said, “you have to promise me not to come back,” a-and I, and then he passed away and I really didn’t have any reason to go back, um, because my mom is here, my brother is here, my sister is here, so, and I just haven’t gotten a chance to go back, but I always ask the question, ‘what would it have been like had this revolution hadn’t happened?’ Some day, some day we’ll go back. It’s been a good journey.