"I remember looking around and thinking to myself, 'Oh my god there are so many foreigners here!' because there were so many white people. But then I realized that I was the foreigner." 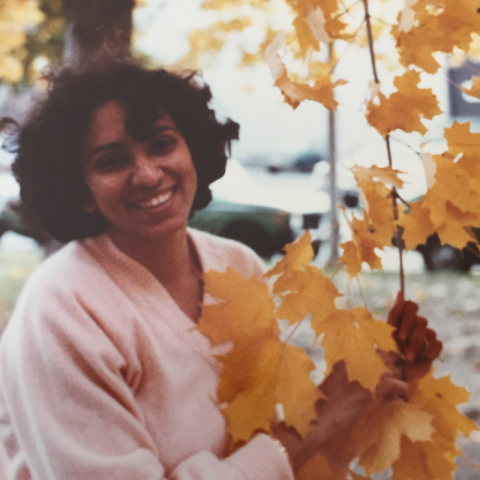 
I just got married six months before. I knew my husband before. When he came back, he was in school over here so he met me at the airport and I remember driving through Boston and my first impression was that it was very, very somber place because there were no leaves on the trees. Very much what it is like now (laughs). No leaves on the trees. There were no open balconies in any of the buildings because that was a big contrast from Bombay so I sort of missed that. And I remember that the reductions of color was also more acute because, you know, the leaves weren’t there and the balconies were not there. Plus, I found most of the people had on black or brown. You know, they had winter jackets. They were really dull. That was a very somber arrival.

And then we went to the housing. My husband was in college so we went to the college campus and we had married student housing. So when we reached over there, it was great because he had actually prepared dinner, like a full Indian meal, so that was awesome (laughs).

So I had worked full-time in India, so I didn’t have a job over here so it took a little---it took some adjusting. My husband was very busy studying all time because he was, you know, doing his masters come PhD, so he was studying all the time. So I was a little isolated from, you know, my family and from my work. I didn’t know anybody, but what was good because we lived in married student housing, I met a lot of other Indian wives and those friendships have still lasted me and we’re still in touch with those friends.

MIT was good because they used to have MIT Wives Group that met every Wednesday. So then I would meet people from a lot of different countries like Germany and Japan and Saudi Arabia and Indians. And then Wednesday mornings, they would do field trips. You know, we would meet at a place on the campus and they would take us on the T and show us different places. So, you know, Kennedy’s birthplace or they’d take us out to a Jewish meal. So, you know, sort of expose us to the city a bit.

And then I fully started getting involved with the, there’s the Indian Student Association also on campus. It was called Sangam. So they would have movies…so that was their great event because we’d all go to Kresge, which is the auditorium, and we’d meet over there and see movies and hang out there.

So one day I remember looking around and thinking to myself, “Oh my god there are so many foreigners here!” because there were so many white people. (Laughs) But then I realized that I was the foreigner.

And, uh, I’m from the north of India so I don’t many people from the south. So that was great living on campus because I got to know not only people from America but from different parts of India.

I guess people reacting to my wearing a sari. You know, I always had to explain myself. And then, I had a pierced nose. It wasn’t common in those days so I stopped wearing it. When I worked at the children’s museum, the kids would ask, “Does it hurt?” and “Why did you do it?” The kids were curious. I basically stopped wearing it. And then for saris also I would only wear them for formal occasion. I mean, I was used to wearing a sari everyday to go to work but I had to adjust to wearing---oh! The worst was wearing closed shoes and socks and stuff like that (laughs).