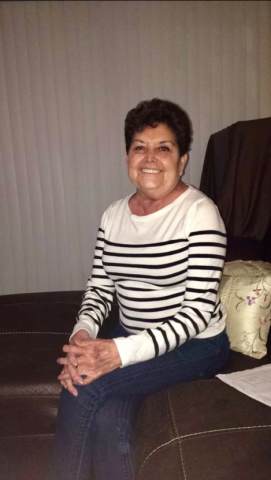 
My maternal grandma, Silvia Cassiano, was born on November 11, 1945 in Guatemala City, Guatemala. She is the middle child, having one older sister and one younger sister. She didn’t have the best childhood, as her family lived a typical Central American life. My grandma had her first child, my aunt Lorena, at the age of 15. By the age of 18, my grandma was married to my grandpa, Oscar Menendez.

My grandma moved to the United States because she was forced to due to the marriage. Her husband, Oscar, moved to the U.S. a year after they were married, leaving behind his wife and infant daughter. He sought to create a better life for his small family as well as help my grandma, his wife, finish her studies in the United States. Unfortunately, he wasn’t much help to my grandma and aunt once they arrived in Los Angeles.


It was December 13, 1966. I flew over from Guatemala. I landed about 2 o’clock in the morning. Everything was legal when I came inside. I have all my paperwork already done in Guatemala.

I got picked up at the airport by my sister-in-law, it was very depressing because my husband wasn’t here and I didn’t got that much money. I was expecting my husband to be here. I had a 3-year-old girl that needed all the basics and I didn’t know the language. I just got to know the basics like good morning, good afternoon, how are you and my way because the English we speak in Guatemala is different than what they speak English in here.

It’s hard to come over when you don’t know anybody. You’re by yourself in this city and nobody that you can actually trust because they’re not your family, different family but its uh through your husband and I didn’t have any family at all in the United States. I was the first one to come over here from my side of the family, yes.

I wanted to raise my kids in a better place. I wanted to have a better future than I have got and better studies, better relations…

And I have two sisters. Now they are here. I had to come over because my husband was working already in here. I came to the United States in 1966, he came over a year after we got married.