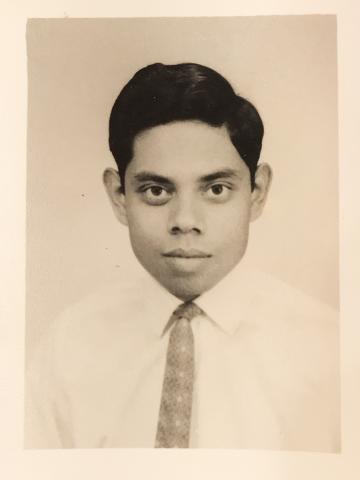 On December 18, 1969, a 27 year old civil engineer from Calcutta stepped foot on American soil for the first time as he landed at JFK on a cold, winter afternoon. The Immigration and Nationality Act of 1965, which abolished national origin quotas that favored European immigration and established an immigration system based on attracting skilled professionals or family reunification, had afforded him the opportunity to apply to immigrate to this country. My dad had applied for a green card in 1967 because he had heard that America was the land of opportunity and the greatest nation on earth. He was granted his green card in the summer of 1969. A newlywed at the time, he made the difficult decision to leave behind his bride until he was able to get settled here.

While he was planning his move, he had heard that a place called the YMCA rented out rooms at an affordable rate, so upon his arrival in New York City, he asked the Air India staff at the airport to help him make a reservation. They booked him a room and showed him to the taxi line and a cab driver took him to the YMCA on 47th St & Lexington Ave. My dad had $3 in his wallet and a bank draft for $300 to start his new life here.

The next day, his top priority was to open a bank account at Citibank so he could deposit his bank draft. Afterwards, he walked over to see the Empire State Building, an iconic landmark that he had seen and heard about ever since he was a child. Seeing the engineering marvel in real life was a dream come true for him.

He headed to Queens the next day because he had heard that a fellow alum from Bengal Engineering College lived there. This alum (whom he had never met and was several years his senior), along with his wife, generously hosted my dad for lunch and dinner and invited him to come back to spend Christmas with them. They wound up helping him learn his way around this new country in those early days and quickly became family to him.

The next morning, my dad picked up the Sunday New York Times and began his job search through the classifieds section. His new friend’s wife typed up a few copies of his resume on her typewriter to aid in his search. He called and stopped by a few engineering firms in the city to drop off his resume, but since it was a holiday week, didn’t have much luck. In those first few days, he survived on hot dog buns (the most delicious bread he had ever tasted) with butter and bananas.

Between Christmas and New Year’s, he connected with a classmate and former colleague who suggested he head to Bethlehem, PA and move in with him while he looked for a job. My dad took him up on the offer and arrived in Bethlehem on December 29th, much to the surprise of his friend’s two other Bengali roommates who were doctoral students at Lehigh University at the time.

The next day, my dad called 5-6 engineering firms to apply for jobs. He was called in to interview at three of them the day after, and extended offers at all three firms the very same day. He started his first job in the US as a structural engineer on January 2, 1970. His salary: $4 per hour.

Six months later, once he felt a bit settled, he moved into his own apartment. My mom joined him in America on July 5, 1970. And so began their new chapter together.

Fifty years later, I am so grateful that my dad took the enormous risk of leaving behind the security of a steady job and all his family and friends in pursuit of the American dream. And I am so proud of all he has accomplished over these five decades.

Immigrants. We get the job done.