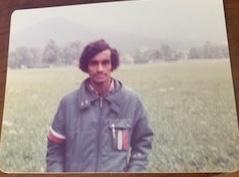 My brother and sister in law, sister and brother in law and parents were already here and I was the last one who was in India as I was finishing up my masters in accounting. Since then, I moved here.

My first impression as I landed into this country was complete fascination. I was blown away by the lifestyle and the way things went around here.

How was it adjusting to life here?

I would say relatively easy from a home-front point of view, but I didn’t get a job for about 7 months so I went through a frustrating phase as far as the job-front is concerned. In fact, I was picked up by one of my brother’s friends who lived in NJ at the time. I traveled on a British Airways flight which did not offer any food at all due to a strike in England, as I survived the whole journey with water and soft drinks. The first thing I did after landing was had a wonderful and delicious South Indian meal.

You are a food entrepreneur now, so back in the days what were food related challenges/adjustments you made to fit into this country?

For the most part of my time here in the beginning, I was with my sister’s up at Rochester(NY), so there were not many problems with Indian food. I moved to California months later and I took a bus from New York to California which took 3 days and 2 nights. I survived on minimal food during the journey. Prior to that I have been to Europe for about 2 months, so I have been on bread and butter throughout the European trip. There was no food problem in San Jose or NEw York. Although, Indian groceries and restaurants weren’t as prevalent at that time, the only restaurant that was available was called Pasand Madras Cuisine, which was about 60 miles away from San Jose in a little warehouse There was only one grocery store at that time.

My first day as soon as I landed in Rochester, I went to NJ, mainly chilled out and rested, because of the long flight. I spent time with my family and friends whom I knew here. The weather was nice as it was summertime but didn't do much sightseeing as I first arrived into the States.

What was the best thing about coming here?

The best thing about coming here is it gave me an opportunity to basically do things at my will which I care about and the opportunity to have that freedom to explore various things, which was what made a huge difference in my life.

Tell me a little bit about the early days here. Did you work or go to school? How did you spend your time? Who were your first friends or others who offered you support?

The early months I was trying to find a job, I used this time to spend time with my family. My parents were here, so I basically learned cooking from my mother and driving from my brother. I was trying to help at home, applying for various jobs and had a trip to San Francisco through train with many resumes in hand as I applied for the jobs. I sold electronic devices and peripherals to companies in India both on a part-time and full-time basis, starting from 1981.

Well, you can do anything in life that you want in America, as long as you work for it.