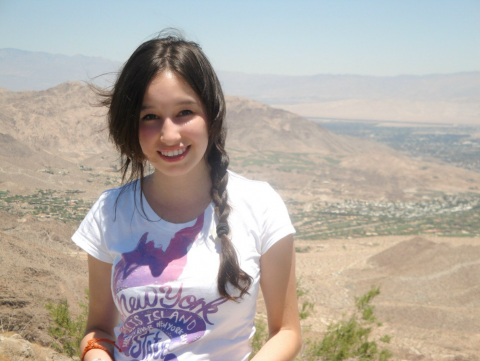 
On June 21, 2011, fourteen year old Sofya Yuryeva left her hometown of Neftekamsk, Russia with her mother to live with her mother’s fiance - who she now calls her father - in Seattle, Washington. Before moving permanently to the Northwest, Yuryeva and her mother first stayed in her father’s condominium in Palm Springs, California. Yuryeva had never been to America and didn’t speak English, but became enamored with the glamour and cinematic qualities of California.

When Yuryeva arrived in the United States, she decided to embrace her new American identity and strove to become a typical American girl. She changed her name to Sophie Donohue, using stepfather’s last name, and enrolled in a Seattle public high school. Although she struggled to learn English and assimilate into American teen culture, Yuryeva had support from her parents, who encouraged her to get involved in school activities.

Today, Yuryeva honors her Russian roots and American identity by studying European Studies and Communications at the University of Washington. She is also a member of a sorority and thanks to cheerleading in high school, has become confident in her English skills. She now goes by Sofya again, and has found Russian community on campus that remind her of home.


So are you recording right now?

First I told our friends I went to St.Petersburg, that I moved there. Then they kind of started realizing that I actually moved to another country. Basically, I left my whole family, we left our apartment. I remember my mom told me, “Don’t look back”. We were both superstitious, and I remember still looking back.

We landed in LAX, and LA is huge. That was really scary, so we had to go find my dad. I remember, like seeing my dad. It just felt like, I’m gonna start crying. It was just like really surreal, like wow, this is it.

We had this condo. I remember coming to Palm Springs. I remember listening to “Party in the U.S.A.” by Miley Cyrus, and it just felt so, like all the palms, like LA you know, California. I was like, "Wow, this is amazing. This is where I’m going to be living."

I think that was the night my dad, I think he gave me an iPad… iPod. I’m pretty sure it has, “Big Girls Don’t Cry”. That was when I was when I got homesick I listened to that song. I didn’t know what it means. Usually I just didn’t know the lyrics, I just understand that the tune sounds sad. So dramatic.

I wanted to be a typical American girl. That was like, my dream. I wanted the whole high school experience like in the movies. I basically had everything I knew about America was just from the movies, like “Mean Girls”. I really wanted to be a cheerleader and I was so nervous. And I remember my dad was like, “You can do it”. He’s the biggest reason I did cheer, and cheer was one of the reasons I opened up and found a group of friends and definitely came out of my shell, and learned better English.