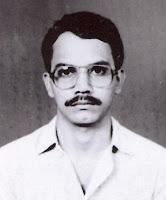 In 1987, the Singapore Airlines flight that I was on took off from Madras (as Chennai was known then) a little before the midnight that made made the transition from the 14th of August to the 15th--similar to India's birth at midnight.

I stepped into a "Jumbo Jet" for the first time in my life. Up until then, I had flown only twice--short domestic flights. The Jumbo Jet was something else. I felt like I had entered a huge hotel lobby. And there was a staircase, for the privileged travelers to get to their seats!

I reached my seat, which was in the rear of the plane, only a couple of rows ahead of the "smoking section."

The stress. The excitement. And everything new. I don't think I slept much. Not in the flight from Madras to Singapore, nor in the long haul from Singapore to Los Angeles with a stop in Tokyo.

The plane landed in Los Angeles. The disembarking took forever. I joined the long line snaking its way to the immigration counters for visitors.

Finally, it was my turn.

I gave the officer my papers and my passport.

My life in America commenced.

One can, therefore, easily understand why I refer to August 15th as my independence day too!

My friend picked me up from the airport. It was a long drive to his home, mostly on freeways. I was excitedly looking all around. I was impressed with everything. I had never seen such an uninterrupted flow of traffic. In India, cows and goats and humans all claimed the road at the same time. But, not here. And, all the vehicles were speeding in one direction within well defined lanes, and across the barrier on the other side there were vehicles speeding in the other direction. Everybody stayed within their lanes too!

Though it took me a decade-plus to formally become an American, there was no doubt in my mind that when I left India on the night of that August 14th, I was leaving to make myself a new home. I looked forward to the new identity that would result.

Coming to the US took a whole lot of planning--from thinking about what I wanted to study to where I wanted to study. Los Angeles was, thus, no simple accidental happening. But, of course, as much as we plan, well, life unfolds in its own cosmic way.