"I’m originally from Germany, and I came from a small little island in the North Sea." 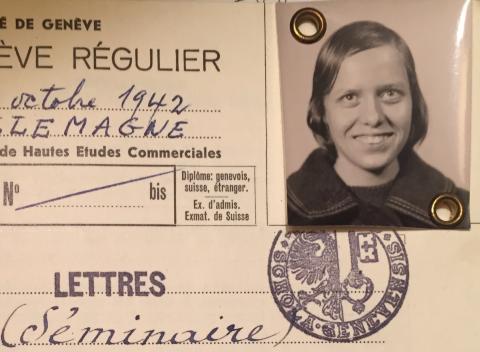 
Sigrun Woten was born in 1942 in Travemünde, a port town in the city of Lübeck, Germany on the Baltic Sea. Some of her earliest memories are of cities reduced to rubble in the wake of World War II and icicles on her walls during regulated power outages during the German occupation. As a college graduation present, her parents sent her to New York City, where she stayed with family who had immigrated there from Germany. This was her first time in the United States in November 1963 at 21 years old, the same month John F. Kennedy was assassinated.

After a year in New York with her family, she returned home to get a job as a translator in the US Air Force station in Berlin. This is where she met her husband, an American serviceman. In 1973, they moved with their children to his hometown in Washington state.


My name is Sigrun Woten. I’m originally from Germany, and I came from a small little island in the North Sea. I finished college, and my parents gave me as a present a trip to New York. My Uncle George had a big delicatessen store in New York. And when the German civilians were allowed to send packages to Europe, we got packages from him every month. It was just the basics - dried flour, coffee, sugar. So of course, I could tell Uncle George now in person what that meant, those packages. I came with a big ocean liner – the Bremen – and my cousin and her husband, they picked me up. My Uncle and his family and my married cousin from Germany, who had immigrated to the US, they all lived all in the same apartment house. My cousin had three kids, my uncle had two, so whoever needed a babysitter, I would just go up and down. I came just there in November so I was there when Kennedy got shot. My cousin had gone out to bring the oldest boy to school. And I was sitting there and her husband called from work. And then he said, “Quick quick put the TV on. Kennedy got shot.” So I mean that’s something you never forget.