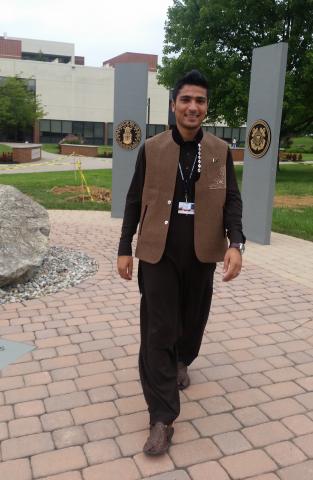 And some of the first images when I landed in the US that I remember… it was openness, I was just open to everything. And there was a sense of adventure in me… sense of adventure in this in this journey, when I came to the U.S. Coming from a big city in Pakistan, Peshawar, and then landing at Atlanta, Georgia airport, I was left… my flight, my connecting flight was, there was like four or five hours of layover where some of my other cohort exchange students left. And then I was waiting at the airport. And just in this completely new place where I didn't know people, people did not know me, that gave me a sense of adventure and openness. And what I did at the airport, I just got up and went up to people. And I was like, “Hey, my name is Yousef, I'm an exchange student from Pakistan,” and just initiated conversations. And then I remember I was talking to four or five people on the same seats next to me. And then everyone… one person kind of introduced me to another is like, “Hey, this is Yousef,” and I was just so excited to talk to people, even though my English was limited at the time, but it was conversational, I was able to make some, some conversations… not too deep or intellectual, but it was good enough for some surface level conversations. And I was going up to people and talking at the airport and having conversations. And compared to now that I think I think airport is the last place that I would want to have a conversation with somebody. I just want to be left alone and just find the quietest place at the airport and just board my flight and get to where, where I need to. And when I like initially at the Atlanta airport, these images are so vivid in my mind that I was just going up to and talking to people.

And then when I took the connecting flight to… where I have to come to Bethlehem, Pennsylvania, from Atlanta, Georgia, and it was a small airplane and I have plane phobia I'm scared of heights and the small airplane makes a lot of movements in the air and a lot of… I was just really nervous in that airplane and I was alone so I have to kind of comfort myself and but then when we were landing in Lehigh Valley, Pennsylvania, I saw… oh especially like around that but Bethlehem area, it was so green everywhere and it felt something out of the National Geographic or one of those Planet documentaries where you land somewhere that's a lush green grass, and that's what it felt to me.

And when someone came to pick me up from the airport, when I was driving around, I saw a lot of deer there was just grass, green root trees everywhere. And, coming from a big city in Pakistan, I was not exposed to or I was not around so much greenery, so that was so completely new to me. And, especially seeing deer for the first time… like everywhere on the side of the road. I mean some, some might have been roadkill, but also others around. And I was so surprised by seeing these images.

And when I got to my college… whenever I would meet someone I think coming from a collective culture I was really I was really like… trying to connect with people and also like seeing them as friends from get go. And whenever like my classmates or other people that I would see at college and then I would be at dorms dining hall, and then I would invite them I was like, “hey, do you want to have dinner with me, lunch with me?” That was just a normal thing to me to not want to eat alone and I think that was a pretty big thing for Americans like in a college cafeteria or somewhere if you invite someone to have food with you or have lunch dinner so I would just left and right inviting people as like because I didn't want to eat alone. And Americans, especially college students, they were so surprised. They're like, “Oh, thank you, thank you so much.” And I was like, “Oh, why are they so? Why? Why is that so different for them?” And I mean, now that I've spent some time in the U.S. I understand why there's this hesitancy around that or just like I think it was just me so coming from a collective culture and so open to these experiences.

And then another like other image or like things that I remember when I initially landed in Bethlehem Pennsylvania, if you ever get a chance go see there's a lot of American flags outside of houses. Like every house that I passed, or I would see… I would usually walk from my dorms to Walmart and in Walmart… like along the way, I would just see these American flags everywhere outside their houses. That was really new to me. In Pakistan we don't have such profound patriotic sentiments, even though, I mean, if even if we do it's like not so outwardly displayed, in like having flags or other things. So that was really surprising to me.

And another thing was the American snack culture. Like when I would meet my friends and when I went to Walmart is party size bags of chips. And everyone in the US even elders… are like usually snacks in Pakistan is considered like chips or like candies, these kinds of things are like little kids probably they eat it. But in the U.S. it was a lot of people there was a big snack culture and they would eat snacks. So, when I went to Walmart, I was just so surprised by the amount of snacks that U.S. store had and I went crazy. I would buy these Lay's barbeque chips, party sized bags and I would finish them in four or five days… probably not really healthy. But that's just my, my first days and my introduction to the U.S.

And I… oh, I just still have so much vivid memories of those first days. And then slowly over time, when you spend more time in the U.S. these experiences sometimes fade but there's a lot of memories that you still remember and definitely for me it was this openness and this adventure-ness and just really warm with people inviting them to… and seeing them as like seeing everyone as friends and really, really like friendly with them. So these even though even though there is a lot… I should say there was cringe era of me that that I've almost embraced it but still there are a lot of things that I did in the beginning that Americans would consider… it will be considered here as like really cringe. And I think it's that was also a beauty… of like, I did not know so much American culture. So nothing stopped me in a way… and I let myself be immersed in that experience fully. Because I was like… oh I didn't know what is American culture… what is not… but I was just doing what I wanted and being open to Yeah, these are this is my… my story of first days in the U.S. I hope you enjoy it.