"Five days after my arrival, the tragedy of 9/11 occurred. Since I was still so young, I wondered if such chaos and destruction…happened frequently in the US." 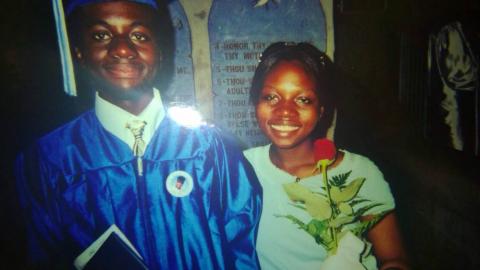 “It was different. Having always been in an area where we barely saw people of different races, it was completely shocking to see the diversity of people on the street.”

Coming from Ghana, a small country in Western Africa, Priscilla also had to get used to America’s size and freezing cold.

“Besides the diversity of people, I remember gaping in awe at how large the buildings were. Skyscrapers are rare in Ghana, and I had never seen buildings so intricately made.

The cold weather was also something that stuck out. Although it was only in the 60s…when I first arrived (September), it was freezing, since I was originally acclimated to extremely humid [and] warm weather.

But the assimilation did not stop there.

“The school environment was something else that stood out to me. I started as a sixth grader upon my arrival here. I remember students in Ghana getting up every time a teacher walked in the room, having to clean the classrooms after the day was over, getting punished by being smacked with a cane if they misbehaved. In America, the students simply got something called “detention” for misbehaving, and some talked back in ways that would have gotten them in serious trouble were they in Africa.”

Priscilla’s arrival in the United States coincided with the terrorist attacks of 9/11.

“Five days after my arrival, the tragedy of 9/11 occurred. Since I was still so young, I wondered if such chaos and destruction…happened frequently in the US.”

Yet Priscilla did not let this “deter the excitement of the new beginnings” that she would share with her family while engaging in her own personal path.

Priscilla has now been in America for almost fourteen years, but she has not forgotten her home country.

“I lived with my grandmother and my brother for quite awhile in Ghana before my arrival to the US. Although I was happy to have a “whole” family with both my parents, I realized how much I missed my grandmother as I got older. [M]aintaining a connection with those you love…can be the hardest thing to do, but [it] is very important. There isn’t a day that goes by that I don’t think of my native country and I intend on visiting when the circumstances are right. America gave me a new life and boundless opportunities that I would have never had if I’d continued my education there, and I will share my blessings with those who never had the opportunity I did one day...”