First Days Project
My name is Hari Agrawal.
"I cried silently with tears blaming myself as to why did I come so far away..." 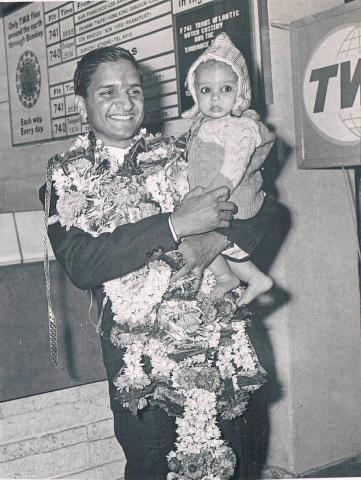 I took a bus from the airport to downtown Chicago to do my graduate study at Illinois Institute of Technology (IIT), Chicago on Jan 26, 1970. I started walking with one small suitcase and a bag on State Street thinking that I could walk such a short distance. After walking a mile or so, I asked someone about the distance to IIT and was told that it was about 8 to 10 kilometers. I had to take a taxi depleting my cash further to reach IIT. There, I was completely a stranger to everybody until I encountered an Indian student (Mr. Rajender Garg, who is still a great friend) who greeted me and explained all about the dorm where I was to stay and eat. He also told me not to go out beyond certain boundary for safety. During emptying my suitcase and setting up in the dorm, I came across the picture of my daughter who was then just 6 months old. I cried silently with tears blaming myself as to why did I come so far away and I will be without her as well as my wife Sharda for more than a year. Being a pure vegetarian, I could not find any food I use to eat at home in Jodhpur (Rajasthan) India. I never saw anybody eating chicken before in my life. Here a person sitting next to me who was eating a whole chicken with steam oozing out and it was really smelling crazy. I had to move somewhere else. Later I took boiled vegetables, mixed some pickles to make it spicy, added some additional red pepper to make it more spicy and ate with Syrian bread as my first super in the dorm that day. The picture was taken at Mumbai airport with my daughter. More than 100 people showed up at the airport who garlanded me heavily.