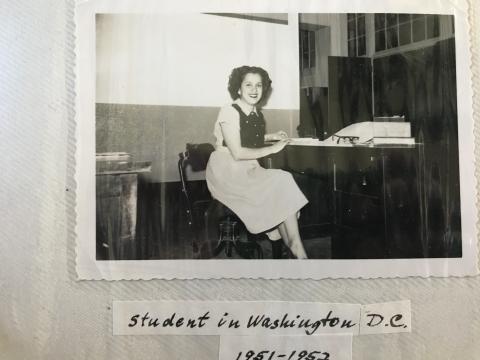 
Isabel came to the United States from 1951 to 1952 for a one-year scholarship program under the Truman Point Four Program in Washington D.C. The program was for students from “developing countries” to come and study in the United States. She then went back to work for the Costa Rican government in 1952 as the head of the foreign trade and statistics department where she met her husband, Ralph, and got married in Costa Rica in 1953.

Promptly after, they set off to the United States to buy their first car and travel around until landing in Washington state, where they met her husband’s family for the first time. Because of work, the couple moved around the country a lot, until eventually choosing to live and raise their six children in Pullman, Washington. They went back to Costa Rica for 17 years to retire. In 2011, Isabel and Ralph moved back up to Seattle.


The whole thing was out of this world for this country girl. This underdeveloped country girl. Standing in front of the White House, standing in front of the Library of Congress, the monuments to Lincoln and to Washington and the reflecting pool, the cherry trees blooming in Washington. A sight to behold. The peace and the desire to be here cause you know the United States had just gotten out of the Second World War. So ’45, see, the United States was just blooming with opportunity. The land of opportunity. It was good, it was good.

After D.C. for a year, I returned to Costa Rica as head of the foreign trade in statistics.

And this one day at the office, you know there was these big tall people. And then there was Ralph. I remember saying that he was kind of cute. He looks like a mamoncito. Mamon is a little fruit in Costa Rica that is green outside, because he had green eyes.

And then on the 20th we got married by the civil judge somewhere but Ralph now could say, or I could say, Isabel Sancho de Loomis to get my Visa in the states.

From when we first got married, we went to Detroit, Michigan to buy our first car: a 2 ton green sedan Chevrolet 1953. And we drove that thing all the way to the state of Washington to meet his mother and sister and brothers and families.

That was a wonderful trip though. Finding motels, that wasn’t that easy. Staying in different places. You know honeymooners. It was just fun it was just good.