"In my first days, when I was walking in the park, people would say hi and start chatting with me." 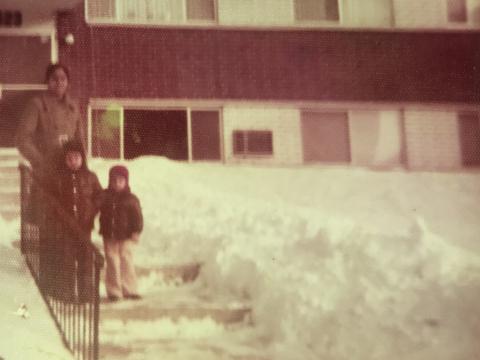 It was a pleasant summer day in Minneapolis, Minnesota when Lakshmi Kalapatapu stepped off the plane, a foreigner in her new own country.

“I came with one small suitcase and two small boys — a four year-old and an 18 month-old — and that was a very big change for me.” Lakshmi hails from a small, coastal town in India called Machilipatnam in the state of Andhra Pradesh, where the weather is humid year-round and everyone knows everyone. She came to the US as a result of the 1965 Immigration and Naturalization Act instituted by Lyndon Johnson, a law that allowed for more immigrants from Asian countries, specifically India, by eliminating previous racial quotas based on national origins. She had never flown before and came to join her husband of six years, Venu, who was already working in Minneapolis, Minnesota, where his job was located.

“We came with about $1,000 in pocket,” she says. Though that isn’t much considering all of the expenses of starting a new life, she says she had a lot more than others. “A lot of people came with only $8 in their pocket. They would come here for graduate school, but they barely brought any money.”

Naturally, Minneapolis was a bit of a shock.

“From August [onwards], we had snowstorms,” she recalls. “That year, the snow didn’t stop until May of the following year. That was really something.”

But the snow didn’t seem to depress her spirits in this unknown land.

“All day long, I would sit at the window with my two boys and watch the snow fall,” she says. “It was so pretty. By March and April people were so sick of the snow, but I enjoyed that time very much.”

The climate was not the only thing that took adjusting to. The culture was very different as well.

“In Minnesota at that time, there were very few Indians,” she says. “And I was wearing saris because I hadn’t gotten used to wearing pants and shirts, so when would go out, so everybody used to stare at me, with my bindi [colored dot worn on the center of the forehead] and bangles . That was the biggest cultural shock.”

However, it didn’t take long for her to get immersed in American culture. 1974 was also the year of the Nixon impeachment. She was thrust into a year of constant media attention on the historic event.

“I watched with my mouth wide open,” she says of the hearings. “I thought ‘Oh my God! How can they talk to the president like that? How can they be so blunt?’”

This prompted her to read more about U.S. history.

“I used to go to the library and bring home so many books,” she says. “I am a history buff to begin with, but this prompted me to learn more about the presidency, what Nixon did, and why he was impeached. I learned a lot in those six months of the Nixon era. In my 45 years in this country, I’ve now watched two more presidential impeachment trials and seen such a difference in partisanship.”

She quickly adjusted to life in America. However, she regretted not being better prepared in certain aspects.

“With my 4 year-old, I made the mistake of overly teaching him all of our mother tongue,” she says. “He knew English, but he would second guess himself if you talked to him in English.”

“We also didn’t bring any American-styled clothes, Indian foods, and other things from India that I wished I had,” she says.

Like most of her peers, she was able to receive a green card in a just few years followed by US citizenship. “Today it’s taking new immigrants almost 50 years to get a green card,” she says. “That’s a lifetime.”

Back then, she remembers feeling welcomed by the Americans she saw.

“In my first days, when I was walking in the park, people would say hi and start chatting with me,” she says. “They would bring their kids over and they would play with my boys while I talked to them. That’s how I made friends. I struggled for a month with speaking English because it is not my first language, but after that, I was able to make friends.”

Those friends were key in her transition to America.

“If I didn’t know what something was, I would ask them, ‘What is this?’ or ‘What is that?’,” she says. “I learned from their example how to do a lot of things.”

“Americans were friendly people,” she says. “They took us in and welcomed us.”