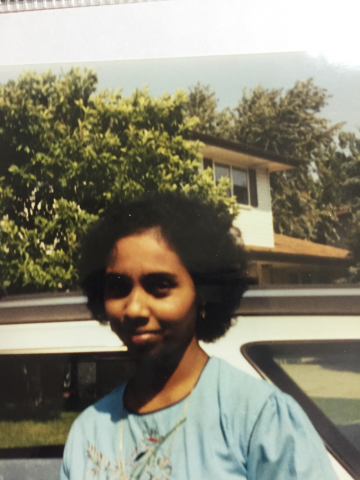 I came here in May of 1993. I came to America on a job visa. I was received by my uncle and his wife. I stayed with them for two months while I was applying for my nursing licensure. Everything was new. The weather and all was different than India. It was warm but I saw that the weather was changing quickly. I also saw that it was different than India because you didn’t see many people outside. Everyone has their own car and you hardly see any neighbors. The people I was staying with both worked and the kids were all in schools. Everyone was basically busy with their own lives. I saw that there was less social interaction between people compared to back home. But the kids and everyone in the home were all nice to me. They took me around wherever they went, for shopping, to friends’ houses. They took me with them so I could see how the community was. I went to church and I met more Malayalee people there.

I started working in June. I had to apply for a temporary license to work as a “nurse – license pending”. Working at the nursing home was not easy to start off. It was a totally different culture where I saw a lot of different ethnicities, different languages and even the English was pronounced differently. All of a sudden, I was in charge of a unit of 50 patients, giving medications and taking care of them; it wasn’t easy. I was staying with a lady who was employee at the nursing home. She was also a Malayalee and would give me a ride in the morning. The coworkers were okay. Some of them were not okay. It was because I didn’t know everything about the culture, of the community, so it took time to learn how things were. For example, the meals for the patients were different from what we ate back home. Like pancakes, syrup and butter for breakfast! Generally the staff was nice, some of them were picky. Some people were bossy, including non-nurses like housekeeping. I worked there a year and a half.

In order to get my license, I had to sit for the NCLEX exam. I took the exam after 6 months. The exam was hard but I prepared well. I think it was the last writing exam, after that it was computerized. I had to go to Chicago to take it. Pappa [husband] and Harsha [daughter] came in December. Raising Harsha was okay. She was so excited to be here. She went to school and made friends very quickly. We didn’t have a baby sitter and Pappa did not have a working visa so he had to stay home and take care of her when she came home from preschool. One of my old friends from nursing school had twin kids here. Harsha and them were the same age so we enrolled all three of them in the same preschool. My friend came maybe a year before me so she also helped me to settle down. She helped me learn how to drive, learn how to shop and move to a new apartment. My uncle helped me buy a car in December. I learned how to drive right away because I had to go to work. Overall, it was very different than India. I was able to adapt to the new situation and I had people to support me. I found a way for stabilizing my job through getting my nursing license but I got nervous because if didn’t get my license, I would have to go back. But I was able to pass the exam the first time. So we started our life again as family in the United States.