"So, in these circumstances, we decided to remain in this country: We became immigrants not by choice but by destiny!" 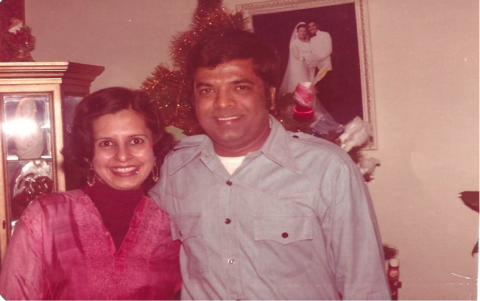 As I stepped on US soil in August of 1972, I felt a sense of excitement at the airport in Chicago as my cousin’s family was there to meet me and, so was my finance, Kais. I had been engaged to Kais a year before, in 1971. We had met in 1969 in India but only briefly interacted together before Kais went to New York to pursue his engineering studies. However, through exchange of letters, we had gotten to know each somewhat.

My first days were full of new experiences that are memorable. On my first weekend in Chicago, Kais treated me to the true American fare, a hamburger that was delicious and big, but I could only eat half of it! I was fascinated with the landscape of neat rows of beautiful homes in the affluent neighborhood of Chicago where I lived in my cousin’s home. I used to babysit my cousin’s children in exchange for room and board as I pursued my post-graduate studies. There I watched TV for the first time and it became one of my favorite past times. I also visited a nearby mall in my leisure time. I was awed by gigantic department stores with their beautiful décor and the escalators/elevators fascinated me.

That first year in the USA was a very romantic period in my life. Kais and I had a wonderful yearlong courtship period getting to know each other intimately. Now that I look back, this could have never have taken place in India before marriage. In 1973, Kais and I were married in a simple civic ceremony, followed by a ‘nikah’ ceremony at home; later, we performed the rituals of a Hindu wedding on stage for a local Indian college presentation.

We were both intent on returning to India after completion of our studies. By 1975, Kais was on a temporary work visa in the US to gain professional experience and I was completing my Master’s degree in special education. As it happened, Kais volunteered to be a case study for a colleague at work who was pursuing a career as an immigration attorney. A couple of days before our scheduled departure for India, Kais called that colleague to request him to close our file, but to our surprise, he informed us that we had received approval for permanent residence and that our files would be transferred to the American Consulate in Mumbai. So we went home and within a few months, received our green cards.

While our original intention had been to reside permanently in India, Kais convinced me to return to the US as he wished to continue advanced studies in engineering. So that’s how we returned to the USA a second time and Kais completed his degree in mechanical engineering in 1978. During this period, our first son, Hakim was born in Mumbai, India. I had gone to my mother’s home during my pregnancy to have the baby as is the custom in our Indian culture. However, he was born with a cleft palate and later after two years was diagnosed with a rare condition that required advanced medical attention and treatment that was only available in a country such as the US. So, in these circumstances, we decided to remain in this country: We became immigrants not by choice but by destiny!

As I look down memory lane, reflecting on our years here as immigrants, I remember that it was not an easy road that we travelled. Determination, positive attitude and support of friends helped us overcome many challenges and obstacles that we encountered as we made a life with our two sons. Our younger son was born in this new country. We have had our struggles and our success stories, like other new immigrants, but overall, we are fortunate to be in a country that valued our abilities, knowledge, and skills. By integrating our Indian cultural values and disciplined upbringing in India, we assimilated into the fabric of American society to become collectively South Asians, considered today as one of the most successful ethnic minorities in this country.