"After that I remember walking to my new desk, put my head down and started crying. I was an alien, I guess. I didn’t fit in at all." 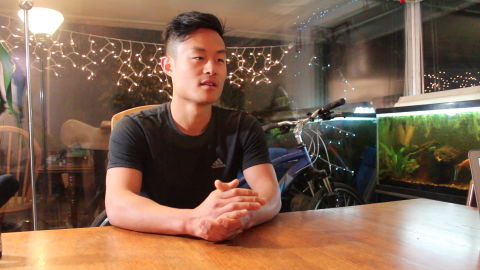 
Thomas Rich came to the United States at the age of eight with his sister and mother. Because they were a military family, they had been apart from his father for years, living in Okinawa, Japan.

Tomo describes his joy at having the family reunited, as well as his frustration at his inability to communicate with his father, or seemingly anyone around him.

Now that he's grown, Tomo reflects on how his unique experience of having a foot in two different worlds shaped his personality. He attributes his wanderlust to the culture shock he experienced growing up.


Tomo: My name is Thomas Rich. I was eight years old when I came here in 2000, moved to Washington state from Okinawa, Japan.

Jen: And what made you guys decide to come to the U.S.?

Tomo: I guess it worked out on my father’s end. It gave us the opportunity to move here, to become a family again. Though military family system I think it’s a common thing.

Tomo: After they introduced me, all I hear is… blah blah blah. Not even a sound, right? Just a bunch of noise to me. After that I remember walking to my new desk, put my head down and started crying. I was an alien, I guess. I didn’t fit in at all. There was no way for me to engage in a conversation, it was just hand gesture or facial expression. And if they keep asking the same thing over and over, I’m like, “I don’t understand.” Back then it was probably like, “I don’t understand” (heavy accent). Yeah, that was my daily struggle, I guess.

Would you rather live in the United States or Japan?

It made me realize I have to be independently stable. That’s probably why I like to travel a lot, cause staying in one place… I haven’t found something to anchor me down yet.