"Having a place of my own, a car of my own, being independent. Being my own person and doing whatever it is I wanted to do, with full responsibility for my actions without having sort of a safety net or somebody to check on me or be worried about me. " 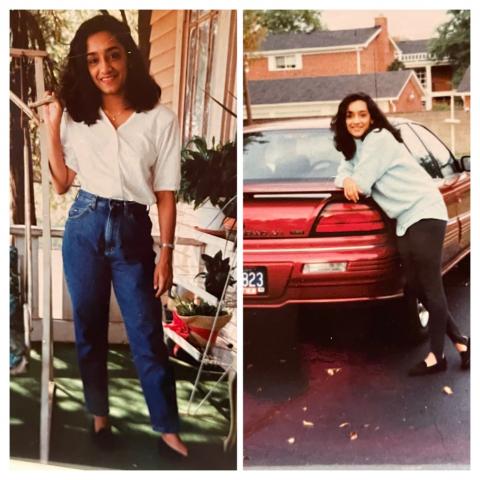 
What is your name?
Supriya Ramanathan.

What year did you arrive in the United States?
June 1994.

Which city and country were you living in before you came to the United States?
Mumbai, India.

And which city and state did you spend your first day in the United States in?
Detroit, Michigan. Oh, wait, actually, I arrived in New York and I stayed there overnight and I took a flight to Detroit after a day. I didn't make my connecting flight and I had to stay overnight to take another flight.

Okay, so then New York was where you spent your first day?
First night, yeah.

Which city and state do you live in now?
Houston, Texas.

What brought you to the United States?
I came to do a residency in pediatrics.

What mode of transportation did you take and how was your trip?
I flew here. And it was a regular flight, nothing spectacular about it.

Who, if anyone, met you when you arrived?
I wasn't met by anybody because I was supposed to catch a connecting flight out of New York, which I didn't make. So I contacted a friend of my father who worked at the airport and he helped me get another flight the next day.

What were your first impressions of the country?
I was excited and happy. It seemed spacious, uncrowded, open.

What did you do on your first day?
I was picked up by a friend and I spent the first day at my friend's apartment. I just talked to them and they took me around their neighborhood and started talking to me about the things I needed to do in order to get my life started on my own.

What were some of the biggest learning experiences you had in your first couple of days and years (short-term and long-term)?
The first couple of days was just fun, like a vacation. Because I was on my own, it didn't really feel like I had left my country, I just felt I had gone somewhere for a vacation. I was excited and happy. I was just observing things, listening to people talk, noticing the differences in the way English was spoken. I was super enthusiastic about everything, and full of energy to try everything, every opportunity and everything that I needed to do to get settled. So the first couple of days, and really most of the first year went like that. I found the language, the style of speaking, very humorous. I found people kind, friendly, very helpful. I was very ready to be happy and impressed by everything so I was. In the second year, the feeling of being on vacation sort of went away. And that's when it sank in that I was really not at home, I was by myself in another country. I had to think about my goals, what my path was going to be, and plan my future. So I did a lot of making checklists and goals, prioritized what I wanted to do over what timeframe. I also spent a lot of time driving around and seeing things that I hadn't had a chance to see in India. I visited museums, I visited supermarkets, there were really not big stores in India, I visited malls, just checking things out. I found I liked plants so I went to the nursery a lot and I bought stuff. I joined a dance class, I joined a martial arts class. I found an apartment and I bought furniture and decorated it beautifully and I would host people; every month I had people over for a potluck or some sort of a party. So I sort of started in a way almost putting roots in that second year, after the first year that was mostly spent just having fun, because I'd already trained as a pediatrician so the work was not really hard; I knew the things that were being taught. So yeah, that's how the first two years went.

What was the biggest difference between America and India?
Less crowded, the space to people ratio was very high. And that was the most striking thing.

What do you think your favorite part about being in America was?
Having a place of my own, a car of my own, being independent. Being my own person and doing whatever it is I wanted to do, with full responsibility for my actions without having sort of a safety net or somebody to check on me or be worried about me. It felt liberating.

What was the most difficult aspect of being an immigrant in America?
I missed my family a lot, that was the hardest thing. Once the feeling of being on vacation went away, I missed the people that I was used to seeing around me every day.

Knowing what you know now, what advice would you give to an immigrant coming from India today?
I would say: you can achieve whatever you set out to achieve, but stay connected to who you are and where you are from.

Overall, are you happy that you came to America?
Yes, I am! Very happy.